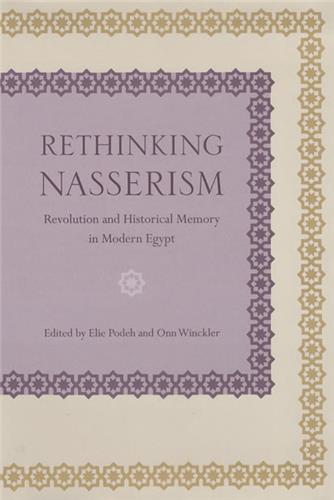 "An enormous amount of academic literature has been published on Nasserism since the 1950s and, to my mind, Rethinking Nasserism is without a doubt the last word on the subject. . . . An outstanding reappraisal of Nasserism as a major force in the 20th-century Middle East."--Israel Gershoni, Tel Aviv University

President Gamal 'Abd Nasser was a beloved figure of the Egyptian people and loomed large over the Arab world during his period of influence (1952-1970). Nasser dominated and defined the politics of an entire generation of Egyptians and successfully spoke to the masses of Arabs in other countries, even going over the heads of their own leaders--something that no other Arab leader since has been able to accomplish since on any considerable scale. In Rethinking Nasserism, distinguished scholars from Israel, the United States, and Egypt provide a definitive reappraisal of the historical force of Nasserism in the ideological, economic, social, and cultural arenas of the modern Middle East in general and of Egypt in particular.

The innovative theme of the collection is Nasserism as a form of populism, described by the editors in their introduction as a combination of various tenets of anti-imperialism, pan-Arabism (or nationalism), and Arab socialism. The book reassesses the achievements and failures of Nasserism during Nasser's presidency and the lasting impact of his ideology on subsequent regimes in Egypt and on the entire Arab world.

Elie Podeh is senior lecturer in the Department of Islam and Middle Eastern History at the Hebrew University of Jerusalem.