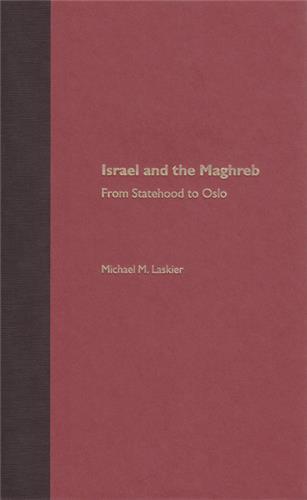 Israel and the Maghreb
From Statehood to Oslo

"A superb job of scholarship. . . . Laskier is a careful historian who weighs his evidence judiciously, compares conflicting sources, and admits what he doesn't know. Historians of the Middle East and of Jewish affairs will welcome the book."--I. William Zartman, Johns Hopkins University

In the first major work to analyze the role of North African countries in the Arab-Israeli conflict, Michael Laskier offers new insights about the common interests and encounters of Israel and the French Maghreb, from the late 1940s on.

He exposes the relatively unknown yet significant efforts by Israel to reduce its isolation in the Arab world by forging intelligence, economic, and political ties with Morocco, Tunisia, and Algeria. Part of its "periphery doctrine," these maneuvers often involved Israel in internal Maghrebi politics and were an attempt to align--secretly, if necessary--with the Arab states with which they were not in direct confrontation. At the same time, however, young men throughout the Maghreb fought alongside countries in the Middle East against Israel, motivated by a desire to support Palestine and to press Israel, as well as the Arab world, to end Palestinian suffering.

Exploring the complex web of inter-Arab politics, Laskier examines the pioneering role played by Tunisian and Moroccan leaders in promoting peace. He describes the emergence of Tunisian president Habib Bourguiba as the first Arab leader to publicly challenge Arab stubbornness over the recognition of Israel; he also examines the important role of Morocco in brokering the contacts that helped lead to Egyptian president Anwar al-Sadat's visit to Jerusalem and to the formulation of the Camp David Accords. In contrast, he discusses Algeria's manifest militancy toward Zionism and its questioning of Israel's political legitimacy.

The book is based on an impressive investigation of sources, including many Arabic, French, and Hebrew documents and personal interviews. Some of the primary Israeli sources contained intriguing data on the role of the Mossad, Israel's central intelligence and secret service agency; several of the Moroccan and Algerian documents had been buried in archival dossiers. While focusing on Maghrebi politics, the book offers an invaluable contribution to our understanding of the broader issues of the Middle East conflict.

"Written with authority, a balanced perspective, and a fidelity to details and historical accuracy." "Laskier has performed a yeoman service in assembling and interpreting such a massive amount of information."
--Journal of Palestine Studie

…a pioneer study of previously unknown or untold events and developments surrounding Israeli-Maghrebi ties. It will undoubtedly serve as a vital guide for future students, scholars, and readers interested in Israeli foreign policy, Arab-Israeli relations, and North African diplomatic history.
--The Journal of Israeli History