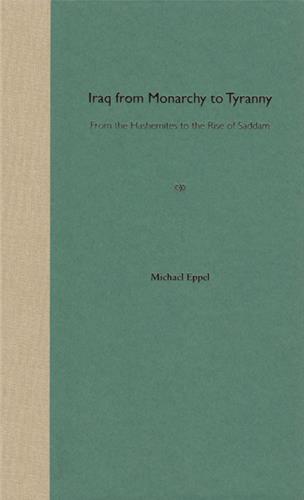 "An excellent analysis of Iraq's failure to stabilize a system other than Saddam Hussein's hierarchy of fear."--Haggai Erlich, Tel Aviv University

This timely book analyzes the political events in Iraq that gave rise to one of the most brutal and sophisticated regimes of the modern era. Analyzing the country's history from 1941 to the Ba'ath Party's takeover of the government in 1968, Michael Eppel re-creates the domestic, social, and ideological climate that led to the establishment of Saddam Hussein's despotic control of Iraq in 1979.

Eppel argues that after World War II, Iraq's ruling elites were impotent--trapped in a complex no-win situation that prevented them from adapting to new social conditions, victimized by external threats and a diverse religious and ethnic population.

From the country's anti-British, pro-German uprising in 1941 until the fall of the constitutional monarchy in 1958, a relatively mild conservative government ruled the country. Between 1958 and 1968 Iraq was governed by several radical revolutionary regimes, military dictatorships that allowed some social and political expression and worked to modernize the country. Despite frequent violent disturbances, political life was tolerably stable.

However, divisiveness among military officers and the exhaustion of the modern middle class, which remained dependent upon the state and the regime, helped the Ba'ath Party become an effective political force. As the state benefited from financial resources derived from oil revenues, the ruling elites were able to weaken all other forces and the Ba'ath Party exploited these conditions to seize power. After years of behind-the-scenes manipulations, the atmosphere was ripe for Saddam's presidency in 1979. Weaving these events into their global and regional context, Eppel offers a compelling explanation of the failure of the old elites and their successors and of the conditions that allowed Saddam to create his dictatorship. He also includes an epilogue with a general outline of Iraq's history from 1979 until Saddam's fall in 2003.

Eppel's primary sources were Iraqi newspapers, memoirs of Iraqi politicians, British and U.S. archives, and United Nations publications, as well as 23 volumes from Iraqi archives that contain the minutes of the revolutionary court that tried both the Hashemite monarchy and those who opposed the revolutionary regime.

Michael Eppel is senior lecturer at the University of Haifa in Israel.

"A welcome addition to the ever-growing documentation on this embattled country."--Choice
--CHOICE