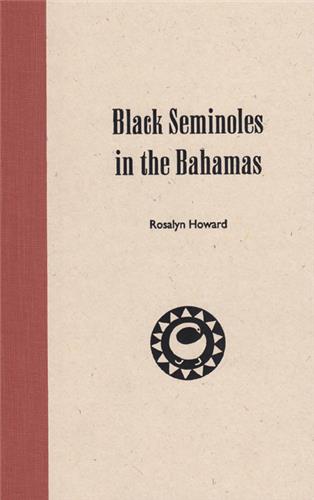 Black Seminoles in the Bahamas

"An excellent case study of a little-studied and poorly known community experiencing the processes of identity formation and culture change."--Brent R. Weisman, University of South Florida

This is the first full-length ethnography of a unique community within the African diaspora. Rosalyn Howard traces the history of the isolated "Red Bays" community of the Bahamas, from their escape from the plantations of the American South through their utilization of social memory in the construction of new identity and community.

Some of the many African slaves escaping from southern plantations traveled to Florida and joined the Seminole Indians, intermarried, and came to call themselves Black Seminoles. In 1821, pursued and harassed by European Americans through the First Seminole War, approximately 200 members of this group fled to Andros Island, where they remained essentially isolated for nearly 150 years. Drawing on archival and secondary sources in the United States and the Bahamas as well as interviews with members of the present-day Black Seminole community on Andros Island, Howard reconstructs the story of the Red Bays people. She chronicles their struggles as they adapt to a new environment and forge a new identity in this insular community and analyzes the former slaves' relationship with their Native American companions.

Black Seminoles in contemporary Red Bays number approximately 290, the majority of whom are descended directly from the original settlers. As part of her research, Howard lived for a year in this small community, recording its oral history and analyzing the ways in which that history informed the evolving identity of the people. Her treatment dispels the air of mystery surrounding the Black Seminoles of Andros and provides a foundation for further anthropological and historical investigations.

Rosalyn Howard is assistant professor of anthropology at the University of Central Florida.

"Black Seminoles fills a significant lacuna in the literature. Historians familiar with the historiography on Florida's Black Seminoles will certainly welcome Howard's attention to the Bahamian community." "Black Seminoles highlights the importance of oral tradition in recalling the past and points to important questions concerning cultural adaptation and identity. Rosalyn Howard has made an important contribution to an overlooked field."
--H-Florida

"Traces the process which led Black Seminoles to the dangerous journey from the Florida Keys to the Bahamas." "Offers pivotal research for the understanding of the spread and adaptation of African culture on the Florida frontier."
--Florida Frontier Gazette

"Will certainly prove valuable to anyone doing comparative work in Caribbean ethnic history, and the histories of the African, Black Seminole, and Seminole diasporas, of which we can only expect more in the future."
--H-LatAm