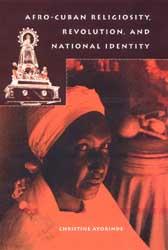 "Ayorinde breaks new ground in her important discussion of the evolution of revolutionary policy toward religion in general, and Afro-Cuban religious practice in particular. . . . Although she is careful not to overstate her case, the conclusion one can draw from her book is that the nation Fidel Castro declared to be 'Afro-Latin' in 1975 is in the process of becoming the world's first socialist state acknowledging (however tacitly) a congeries of African-derived religious forms as its 'national' religion."--Stephan Palmié, University of Chicago

Afro-Cuban religions--especially the practice of santeria, based on West African traditions--are an essential aspect of contemporary Cuban identity, Christine Ayorinde argues, and their existence has forced the current revolutionary state into bizarre and contradictory positions.

Ayorinde's bold assertion confounds official pronouncements about the irrelevance of religion in a modern socialist state. The revolutionary leadership has acknowledged the centrality of Cuba's African heritage, while upholding the idea of a nationhood that transcends racial difference. Ayorinde proposes that the conflict between the desire to recognize the country's African roots and the official commitment to a secular state has created a complex, often paradoxical situation. Despite an ideological campaign to create a new, rational society, African-derived religions are emerging today for the first time from a position of marginality. Cuba now is beset with a sense of disorientation as well as a return to old habits and patterns, including racial inequality.

Based mostly inside Cuba, Ayorinde's research includes interviews and conversations with individual Cubans, including practitioners of Afro-Cuban religions from different ethnic backgrounds. Some are movers and shakers in the liberal debate about contemporary religion, some are new initiates, others have been practicing for 50 years or more. Some have been members of the Communist Party; others never have been, and make their living from the practice of their religion. Ayorinde also interviewed both religious and atheist commentators on Afro-Cuban religions and culture, including academics, journalists, party officials, and members of governmental and nongovernmental institutions, many at the forefront of efforts to give santería greater recognition as a central component of the national culture.

In addition, the book offers a fresh historical overview of changing religious forms and attitudes in Cuba, examining the encounter with European culture and the Roman Catholic Church, religious practice among slaves in the 19th century, the concept of racial fraternity articulated by Cuban patriot Jose Martí, and the witchcraft scares of the early decades of the 20th century, when religious practices were associated with criminality. Its emphasis on the period since 1959 and on the current decade, in which the government has begun to rethink aspects of the revolution, places it on the cutting edge of studies that examine contemporary Cuban culture.

Christine Ayorinde, formerly at York University, Ontario, is the author of several articles and book chapters on Cuban religion and identity.

"A helpful addition to the growing body of literature dealing with the Afro-Caribbean experience. What sets this work apart is its concentration on the public context of Afro-Cuban religiosity."
--CHOICE

"Religions like Santeria, Palo, and Espiritismo revolve around their own powerful axis, their own epicenters of meaning and community. Afro-Cuban Religiosity, Revolution, and National Identity provides a good guide for looking at the Cuban government's repeated disengagement with the internal crux of that reality."
--International Journal of African Historical Studies

What makes Ayorinde's book unique is that she herself is a Nigerian, observing what Cubans have [re]made of her ancestral traditions…a compelling read…
--Journal of Latin American Studies