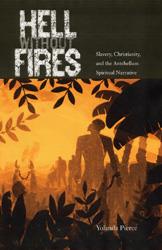 Hell Without Fires:
Slavery, Christianity, and the Antebellum Spiritual Narrative

"Solid readings of well-known and some remarkable neglected spiritual narratives, pointing out compelling and novel features that distinguish the texts and their interpreter. The conclusions Pierce draws are not entirely predictable and lead to interesting dislocations and complexities regarding how we assess religion in the context of slavery."—Kimberly Rae Connor, University of San Francisco

"The first treatment of early African-American spiritual narrative as a genre in its own right. . . . Pierce's work advances the study of African-American literature and religion by resisting the dualistic thinking that has characterized most of the work in this field."—Katherine C. Bassard, Virginia Commonwealth University


Hell Without Fires examines the spiritual and earthly results of conversion to Christianity for African-American antebellum writers. Using autobiographical narratives, the book shows how black writers transformed the earthly hell of slavery into a "New Jerusalem," a place they could call home.

Yolanda Pierce insists that for African Americans, accounts of spiritual conversion revealed "personal transformations with far-reaching community effects. A personal experience of an individual's relationship with God is transformed into the possibility of liberating an entire community." The process of conversion could result in miraculous literacy, "callings" to preach, a renewed resistance to the slave condition, defiance of racist and sexist conventions, and communal uplift.

These stories by five of the earliest antebellum spiritual writers—George White, John Jea, David Smith, Solomon Bayley, and Zilpha Elaw—create a new religious language that merges Christian scripture with distinct retellings of biblical stories, with enslaved people of African descent at their center. Showing the ways their language exploits the levels of meaning of words like master, slavery, sin, and flesh, Pierce argues that the narratives address the needs of those who attempted to transform a foreign god and religion into a personal and collective system of beliefs. The earthly "hell without fires"—one of the writer's characterizations of everyday life for those living in slavery—could become a place where an individual could be both black and Christian, and religion could offer bodily and psychological healing.

Pierce presents a complex and subtle assessment of the language of conversion in the context of slavery. Her work will be important to those interested in the topics of slave religion and spiritual autobiography and to scholars of African American and early American literature and religion.

"Pierce analyzes each of the conversion narratives in fresh, revealing ways, and scholars should be motivated to reread the original accounts--and others like them--afresh." -- John B. Boles
--Biography

"Pierce's book helps establish black spiritual, or conversion, narratives as an important genre in its own right. It is constantly informed by much of the best recent scholarship on slavery, religion, and gender relations."
--Register of the Kentucky Historical Society

"Yolanda Pierce packs a wealth of information in this small book. It is a model more writers should emulate. Readers will be amply repaid for time spent reading it."
--Journal of Southern History

" Pierce's analysis of these narratives help to explain slaves' conversion to the religion of their oppressors, what forms of advocacy those converts called to preach could claim, and the ways that early African American converts merged African religions and Protestant Christianity."
--African American Review

"A useful and engaging addition to the growing literature on antebellum religious narratives."
--African American Review