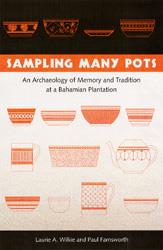 Laurie A. Wilkie and Paul Farnsworth

"Demonstrates the importance of a richly detailed, historically and archaeologically contextualized study of a community of enslaved and 'apprenticed' Africans and African-Americans for an understanding of the creolization processes that operated to form 'African-American culture'."--Kenneth L. Brown, University of Houston

The enslaved population of Clifton Plantation was an early 19th-century cultural melange including native Africans, island-born Creoles, and African-American slaves brought by the owners from the American South as part of the Loyalist resettlement. This study of the multi-ethnic African community explores the diverse ways that members of this single plantation community navigated the circumstances of enslavement and negotiated the construction of New World identities within their families and with their neighbors.

Focusing on the household and community levels of social integration at Clifton Plantation, New Providence, Bahamas, from 1812 to1833, this study employs a variety of evidence to reconstruct not only the structures and artifacts of the plantation but the identities and lives of the individuals who used them. Not only do we know the names, ages, origins, spouses, children, and kinfolk of most of the inhabitants, but the study provides additional detail about their jobs, work schedules, rewards and punishments, material culture, and religious belief systems. Drawing upon archaeological evidence from a tightly controlled excavation of the site, historical data on the plantation, its owner, and the enslaved and free Africans and African Americans residing there, and ethnographic data from West Africa, the Caribbean, and North America, this volume provides a remarkably detailed picture of the lives of the plantation's enslaved and indentured residents.

Utilizing the detailed contextual data, the authors are able to trace changes in the culture and identities of the individual residents over the two decades of their community's existence. In so doing, Wilkie and Farnsworth demonstrate just how much more can be understood about the lives of enslaved peoples in the New World through this kind of community study.

Laurie A. Wilkie is associate professor of anthropology at the University of California, Berkeley.

…a scholarly and commendable study that adopts an innovative interdisciplinary framework in contextualizing the archaeological research, points to new ways of thinking about slave lives and experiences, and provides food for thought and stimulus to debate.
--American Historical Review