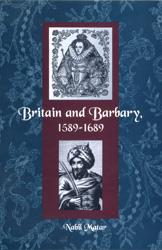 "This important and fascinating study of early modern England’s relationship to North Africa by the foremost expert on the topic is magisterial in its reach and groundbreaking in the implications it holds for seventeenth-century English culture and political history."--Mihoko Suzuki, University of Miami

"Following an incisive re-appraisal of “The Moor on the Elizabethan Stage”–vital reading for anyone interested in the plays of Shakespeare and his contemporaries – Professor Matar offers a groundbreaking study of Britain's response to Barbary in matters of state and stage from 1589-1689. This is an exceptional final volume to an inestimable trilogy."--Patrick Spottiswoode, Shakespeare's Globe "Unique for its command of English and Islamic primary sources and for its grasp of literary, cultural, and political history, 'Britain and Barbary, 1589 - 1689' marks another indispensable contribution by Nabil Matar to our understanding of the relationship between Britain and Islam in the early modern period. Written with unusual clarity, Matar's book organizes a wealth of fascinating detail within a narrative that informs our understanding and challenges preconceptions. While firmly grounded in the literature and history of the sixteenth and seventeenth centuries, the book has much to offer any reader who seeks to develop a better understanding of the multi-faceted history of Christian Europe and Islamic North Africa."--Jack D'Amico, Canisius College Matar examines the influence of Mediterranean piracy and diplomacy on early modern British history and identity. Drawing on published and unpublished literary, commercial, and epistolary sources, he situates British maritime activity and national politics, especially in relation to the Civil War, within the international context of Anglo-Magharibi encounters. Before there was the British encounter with America, there was the much more complex and destabilizing encounter with Islam in North Africa.

Focusing on specific case studies, Matar examines the impact of early visits of Moroccan officials on English playwrights such as Peele, Shakespeare, and Heywood; the captivity of thousands of British sailors in North Africa and its domestic consequences in the first women’s protest movement in English history; the captivity of British women in Barbary, especially the English sultana Balqees; the absorption of thousands of "moors" into the British slave trade; and the aftermath of the colonization and desertion of Tangier. Matar shows that when Barbary was militarily and diplomatically powerful, its relations with and impact on Britain were extensive.

Nabil Matar is professor of English and chair of the Department of Humanities and Communication at the Florida Institute of Technology. This book is the third and final installment in his trilogy that includes Islam in Britain, 1558-1685 and Turks, Moors, and Englishmen in the Age of Discovery.

"A valuable work, and timely, given renewed interest in the 'problem' of relations between Islam and Christendom."
--New York Military Affairs Symposium

"offers valuable insights into the relationship between Britain and Barbary in this period."
--International Journal of Maritime History

"thesis that the shifting power relations between Britain and Barbary explain the shifting literary (especially theatrical, his main focus) depictions of North Africans; in short, 'when Britons feared the Moors, they invented them in Othello-like heroic and dangerous terms; when they no longer feared them, they turned them into dull natives or noble savages - stereotypes to entertain but not to threaten' (10). By interweaving the diplomatic story with the literary treatments, Matar makes a persuasive case. And for this reason the book is valuable as both a history of Anglo-Barbary relations and of their cultural import, at least in England."
--Itinerario

…Nabil Matar's work has considerably improved our knowledge of the relationships between North African and Britain in the early modern period. …Britain and Barbary 1589-1689 is the third installment of a masterfully-researched and crisply-written trilogy on the topic… …Matar considerably enriches our understanding of the very current issue of the relationship between Europe and Islamic countries. …an important contribution to our understanding of the mutual political and cultural impact of interaction between Britain and Barbary, peaceful or violent… …helps us understand the larger issues of the complex historical relationships between Europe and Islamic countries.
--Renaissance Quarterly

…expertly tells the tale of the pirates of the Magharabi.
--Chronique

Matar adduces rich documentation to tell the story of Britain and Barbary during the century following the defeat of the Armada…he reveals a far more complex and interesting past than others have been able to do.
--Journal of the Royal Asiatic Society

As Matar spins this fascinating tale and develops his tight argument, he provides a rich context for understanding much of the Moorish-centered drama and fiction of the time…
--South Central Review

"It is Nabil Matar's ability to match the telling detail to the historical sweep of his larger argument that makes Britain and Barbary such a pleasure to read. . . .Future histories of the period will be unable to ignore his insights."
--International Journal of Middle East Studies