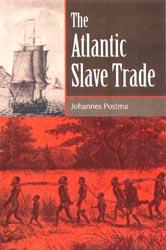 "In the last few decades, there has been an explosion of interest in and research on the Atlantic slave trade. Despite such trends, however, the field has been lacking a solid textbook that should provide students early in their academic careers with an introduction to the topic. . . . Postma fills this void, bringing us a concise survey of the Atlantic slave trade . . . a clearly written broad survey that does not attempt to oversimplify or dumb-down the material."--EH-NET

In 1502, the first African slaves were taken to Hispaniola. In 1888, Brazil became the last nation in the Western Hemisphere to outlaw slavery. For the nearly 400 years in between, slavery played a major role in linking the histories of Africa, North and South America, and Europe. Beginning with an overview of African slavery in the New World, Postma provides a detailed examination of five separate aspects of the phenomenon:

Following these extensive analytical essays are biographies of important individuals—both black and white—in the history of the slave trade. Thirteen primary documents written by enslaved Africans and white officials, an annotated bibliography, and a timeline complete the book, making it a comprehensive and accessible introduction to the subject.

Johannes Postma is emeritus professor of history at Minnesota State University, author of The Dutch in the Atlantic Slave Trade, 1600-1815, and co-editor of Riches from Atlantic Commerce: Dutch Transatlantic Trade and Shipping, 1585-1817.

Misfortunes and Shipwrecks in the Seas of the Indies, Islands, and Mainland of the Ocean Sea (1513–1548)