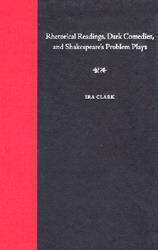 "The most detailed recent examination of the category of the problem play, Clark's book stands as perhaps the only monograph-length work in recent years entirely devoted to rhetorical readings of early modern literary texts."--Douglas Pfeiffer, University of California, Irvine

"In a significant body of published scholarship and criticism aptly characterized as sociological in impulse, Ira Clark has proven himself in recent years to be one of the most deeply informed and widely conversant critics of 16th-century and 17th-century English drama currently working in America. Building on that information now, and drawing upon those many conversations, he proposes in his new book a turn to rhetorical readings which itself participates in the recent turn to a new formalism. The rigor of the demonstration and the wide range of its applicability recommend this book to all students of English literature."--R. Allen Shoaf, co-founding editor, Exemplaria

In the very early 1600s, Shakespeare began writing plays that have proved
troubling for audiences. Measure for Measure, All's Well That Ends Well, and Troilus and Cressida came to be known as the "the problem plays"--ostensibly written as comedies but without a clear comic resolution. Clark argues that the key to understanding these complicated works is discovering their most prominent rhetorical features. This book is the first to frame the discussion in terms of rhetorically based readings.

Drawing upon a wide base of reading in late Tudor-early Stuart drama, Clark offers a formal anatomy of the "problem play" genre, which serves as a primary context for reading the three plays. He also resuscitates the methodological resources of new formalism in light of more recent theoretical approaches--not only through his reexamination of the historiography of dramatic genre but also through his foregrounding of the history and theory of rhetoric.

In a departure from the approaches of other rhetorical studies in early modern literature, Clark emphasizes the actual readings of literary texts rather than the history of rhetorical theory, offering useful summaries of scholarship on particular aspects of rhetoric in the period (particularly the chiasmus and the gnomic sententium) in support of close readings. He employs the language of early modern rhetoric to demonstrate what others have approached through different means--the artful fusion of "matter and manner" in Shakespeare's writing--and provides a set of case studies that will be especially useful for teachers of Shakespeare in undergraduate classrooms, where formal patterns can often provide verifiably significant places of entry into a text. Notable also for its encouragement of further rhetorical analysis of literature more broadly, Clark's book will appeal to critics interested in formalist and new formalist approaches to early modern literature, to Tudor-Stuart drama scholars for its reassessment of the category of "problem play," and to scholars of the history of rhetoric and of rhetorical reading for
its sustained exploration of the chiasmus, the sententium, competing styles of speech, and the ethical appeal.

Ira Clark is professor of English at the University of Florida.

…Clark is well informed about critical history and current critical debates, and relates the stylistic issues in the foreground…the book recommends a welcome interaction of formal and contextual study.
--Medium Aevum

"Offers scholars, whether proponents of history or form, theoretical and critical claims well worth grappling with."
--Renaissance Quarterly

" Clark both provides a valuable overview of what "problem play" has meant in Shakespeare studies and delivers interpretations that bring some admirable clarity--paradoxically, by emphasizing ambiguity and ambivalence--to these notoriously difficult plays."
--Studies in English Literature

" Those interested in the function of specific rhetorical forms in Shakespeare's problem plays will find material worth reviewing in this very focused study."
--Comparative Drama