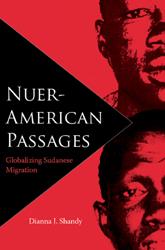 "A powerful ethnography, it highlights the migratory patterns of the Nuer people whose lives and worldviews have inspired generations of anthropologists all over the world. . . . A welcome contribution to the documentation of one of the most interesting political migrations today."--Rogaia Mustafa Abusharaf, senior fellow, Pembroke Center, Brown University

Traditionally a community of cattle farmers in Sudan, the Nuer are one of anthropology's most celebrated peoples. Half a century after social anthropologist Sir Edward E. Evans-Pritchard introduced the Nuer people to the global consciousness, they began arriving in the United States as refugees. Approximately 25,000 settled in such cities as Sioux Falls, South Dakota, Nashville, Tennessee, and Saint Paul, Minnesota. In this study of their migration from a war-torn society to North America, Shandy asks how the diaspora Nuer, especially Nuer-Americans, deal with changing kin obligations and privileges to maintain their Nuerness. What parts of a people's culture are left behind when they move to another country? How much of the home culture and coping strategies continue to aid refugees trying to fit into a new society? These questions are not only crucial for understanding how best to view refugees, but all kinds of global migrants.

Assumptions that refugees fleeing to Western countries come from "stone-age" societies do not recognize the ways Africans employ social networks and technology in their quest for better lives for themselves and their families. Shandy argues that flawed representations fail to credit African populations with linkages between "home" and the diaspora, overlooking important realities in how these ties shape the lives of people in both settings. Refugees are not hopeless beneficiaries of the communities who are receiving them, but rather, social actors and active agents in producing culture and shaping their own futures.

Drawing on research from various locales throughout the United States and in Ethiopia, Shandy's analysis of international social networks captures the sophistication of 21st-century global migrants and the ways they juggle identities while pursuing strategies that simultaneously look forward and preserve tradition. This book contributes significantly to the growing field of migration in general and African refugees in particular, whose movements have been largely undocumented. Written with a diverse readership in mind--including professionals working with migrant populations--it will be a welcome reference for scholars of African studies, globalization theory, cultural anthropology, migration, peace and conflict, and humanitarian studies.

Dianna J. Shandy is associate professor and chair of anthropology at Macalester College.