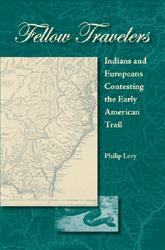 "Levy takes a broad canvass and examines relations between native and non-native travelers . . . as well as the different understandings, experiences, and perspectives they brought to the trail. This book is a contribution to 'trail studies,' but . . . more than that, the lessons of the encounters discussed here have much wider application and relevance to the larger collision of cultures that is early American history."--Colin G. Calloway, Dartmouth College

When Europeans first arrived on North American shores, they came to a continent crisscrossed by a well-trodden network of native trails. The traders, missionaries, diplomatists, and naturalists who traveled these trails depended in no small measure on the skills, knowledge, and goodwill of the native people who were squarely in colonization's crosshairs. This study of 16th- to 19-century native and European travel companions, or "fellow travelers," as Levy calls them, draws on anthropological studies and applies ethnohistorical methodology to convey how Indians and Europeans traveling together and seeing the same things might interpret them in very different ways. Examining the writings of European travelers who took to trails and rivers from the Rio Grande to the Arctic, Levy argues that travel relationships evolved from patterns of coercion and miscommunication to partnerships based on careful and constant negotiation. The shared trail was an arena of contested meanings. Levy explores the many forms such contests took and how they contributed to the larger shape and course of colonial travel.

Choosing one path over another, accepting or rejecting advice, and deciding whose travel habits to respect on the trail all influenced the small footsteps that made up every colonial trek. Dispelling the simplistic image of European travelers and explorers as heroes, Levy stresses the contingent and dependent nature of these endeavors, noting that natives were vital to the Europeans and vice versa; many natives came to rely on their fellow travelers as well. The realities of the trail potentially blurred distinctions among people eating the same food, treading the same path, and often wearing similar clothes, yet travelers worked hard to maintain distinctions between them. In sharing the rigors and burdens of the trail and relying on one another in a variety of ways, Indian and European travelers entwined their fates.

" This remarkable book opens a new space for understanding the complicated relationship between Natives and Europeans in early North America. It offers us a new cast of charactres, a new stage, and a new way to read the script. Levy skillfully teases out Indian voices and meanings from European documents. Gracefully written and astutely argued, his book should have a place on the short shelf of works that can change our angle of vision about the early American past."
--American Historical Review

" Presents a persuasive case that encounters were tense, contested occasions and that these features endured far longer than other approaches might suggest."
--Journal of American Ethnic History

"There is much of value in this book. The anecdotes concerning native guides Turco, Sqorhea, Nestabeck, Matonabbee, and Bearskin are fascinating in their own right."
--Journal of Anthropological Research

"Levy's elegantly written and intelligently argued book should find a welcome spot on the short list of works that provide significant insights and suggest fruitful new directions for expanding our understanding of cultural contact in early America."
--The Journal of Southern History

"Offers a fresh look at the landscape of the trail."
--The Historian