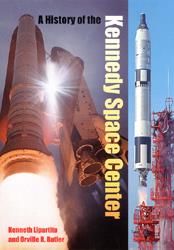 A History of the Kennedy Space Center


“Writing fine, vivid prose, Lipartito and Butler . . . [focus] on the dedicated men and women behind the scenes who worked on the engineering required to lift a rocket out of Earth’s gravity and made the American space program a success.”—Publishers Weekly

“A comprehensive treatment of the history of the Kennedy Space Center (KSC) and the U.S. space program.”—Choice

“Excellent. . . . Even someone with no knowledge of the history of spaceflight would find it engaging and informative.”—Technology and Culture

“Lipartito and Butler conducted many interviews at KSC, other NASA centers, and NASA headquarters in Washington, DC, to flesh out their research. . . . They bring alive and personalize the trials and frustrations, and the joy and excitement, of the launch operations crew at the center.”—Physics Today

“A necessary starting point for any further historical research that involves KSC. . . . It will be the definitive work on KSC for years to come.”—Isis: A Journal of the History of Science Society

“A well-written, comprehensive history of one of the key historical sites of the second half of the twentieth century.”—Southern Historian

"A valuable addition to studies of NASA field centers."--Stephen P. Waring, University of Alabama, Huntsville, and author of Power to Explore: The History of NASA's Marshall Space Flight Center 1960-1990

"Important to specialists in space history, as it points out the distinctions between R&D and operations, and how this affects the institutional and organizational issues in space-related institutions. However, it is also good for a general audience due to the author's lively style."--Stephen B. Johnson, University of North Dakota and author of The Secret of Apollo: Systems Management in American and European Space Programs

This first comprehensive history of the Kennedy Space Center, NASA's famous launch facility located at Cape Canaveral, Florida, reveals the vital but largely unknown work that takes place before the rocket is lit. Though the famous Vehicle Assembly Building and launch pads dominate the flat Florida landscape at Cape Canaveral and attract 1.5 million people each year to its visitor complex, few members of the public are privy to what goes on there beyond the final outcome of the flaring rocket as it lifts into space. With unprecedented access to a wide variety of sources, including the KSC archives, other NASA centers, the National Archives, and individual and group interviews and collections, Lipartito and Butler explore how the methods and technology for preparing, testing, and launching spacecraft have evolved over the last 45 years. Their story includes the Mercury and Gemini missions, the Apollo lunar program, the Space Shuttle, scientific missions and robotic spacecraft, and the International Space Station, as well as the tragic accidents of Challenger and Columbia. Throughout, the authors reveal the unique culture of the people who work at KSC and make Kennedy distinct from other parts of NASA.

As Lipartito and Butler show, big NASA projects, notably the Space Shuttle and the International Space Station, had much to learn on the ground before they made it to space. Long before a spacecraft started its ascent, crucial work had been done, work that combined the muscular and mundane with the high tech and applied the vital skills and knowledge of the men and women of KSC to the design of vehicles and missions. The authors challenge notions that successful innovation was simply the result of good design alone and argue that, with large technical systems, real world experience actually made the difference between bold projects that failed and innovations that stayed within budget and produced consistent results. The authors pay particular attention to "operational knowledge" developed by KSC--the insights that came from using and operating complex technology. This work makes it abundantly clear that the processes performed by ground operations are absolutely vital to success.

Writing fine, vivid prose, Lipartito and Butler wisely avoid concentrating on the hot-shot astronauts, focusing instead on the center itself and on the dedicated men and women behind the scenes who worked on the engineering required to lift a rocket out of Earth's gravity and made the American space program a success.
--Publishers Weekly

" A comprehensive treatment of the history of the Kennedy Space Center (KSC) and the US space program. Recommended. General readers/"
--CHOICE

"Lipartito and Butler have done an impressive amount of research. Very readable and manages to bring the subject alive. Even someone with no knowledge of the history of spaceflight would find it engaging and informative. This is an excellent comprehensive history of KSC."
--Technology and Culture

"No personal, community, or academic library America Space and Astronautics history collection can be considered complete or comprehensive without the inclusion of "A History of The Kennedy Space Center!"
--The Midwest Book Review

"The definitive work on KSC for years to come."
--An International Review Devoted to the History of Science and its Cultural Influences