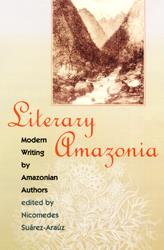 "This could be one of the most important collections of literature in translation to appear this year."--Choice

"A dazzling spectacle of diversity . . . This new, emergent, exciting book is a read worth its price. No collection of world literature, personal or public, is complete and comprehensive without a copy of Literary Amazonia."--World Literature Today

"Unusual in its enlightened departure from a geopolitical organization of literary production. The quality of the works and their exceptional translations are fitting tributes to a bold new view of an important facet of Latin American literature, by and large unfamiliar to most readers."--Leland Guyer, Macalester College, St. Paul

This remarkable selection of 20th-century Amazonian literature presents writing from the indigenous and mestizo people of the Amazon basin, recovering their forgotten voices for the Latin American literary canon. Most of these pieces--from 24 representative poets and 12 prose writers--are collected and translated into English here for the first time.

Reflecting the editor's Pan-Amazonian vision, the book's organizational principle embraces the entire 7 million square kilometers of the Amazon basin as one imaginary space linked by myth, history, geography, and economy--not divided into arbitrary political regions. Most inhabitants live along the banks of the Amazon River or its more than 1,000 tributaries, the widespread water system that unifies the work of these writers. Contributors to this volume also come from Amazonian cities such as Iquitos in Peru and Leticia in Colombia as well as from the Andean cities of Quito and La Paz and the English-speaking country of Guyana.

These poems, stories, and passages from novels include traditional themes of the indigenous groups, many dealing with their threatened survival and the relationship of humans to nature. They describe colonial and neocolonial exploitation of the land and its inhabitants, recent urbanization and its effects, and the individual concerns of each author, who frequently assumes the role of spokesperson for social justice. Often the writing speaks through myths, such as the tale of the boto, the pink river dolphin capable of metamorphosis into human form, or the story of the beautiful woman who gave birth to the Amazon River with her inconsolable and torrential weeping. It includes the Amazonian tradition of haiku verse, which attests to the cultural presence for more than a century of a sizable Japanese colony in the region.

Amazonia typically has been regarded as a jungle environment--a source of folk tales and the concern of anthropologists. This pioneering collection illustrates the extraordinary multiculturalism of the region and its evolving contemporary culture. While turning notions of national literatures upside down, the book will contribute to the construction of a new Amazonian identity and will position the region's creative writing firmly inside mainstream Latin American literary history. What's more, it evokes the astonishing and marvelous beauty of one of the world's most important river cultures.

Nicomedes Suarez-Araúz is director of the Center for Amazonian Literature and Culture at Smith College.

"This could be one of the most important collections of literature in translation to appear this year." "This book introduces numerous unknown talents and is a must for any institution supporting Latin American studies, Spanish and Portuguese literature, or comparative literature." Summing up: Essential. All collections. S.E. Cooper, California State U.--Chico
--Choice

"A dazzling spectacle of diversity." "This new, emergent, exciting book is a read worth its price. No collection of world literature, personal or public, is complete and comprehensive without a copy of Literary Amazonia."
--World Literature Today

"A rich selection of material in this short volume which will bring to the attention of a broad audience a number of writers who might no otherwise be read easily, widely or even together due in part to their material or linguistic inaccessibility, especially to an English-speaking audience. As likely to appeal toa general as to an academic readership. A fine starting place for an exploration of its diverse lettered cultures."
--Bulletin of Spanish Studies