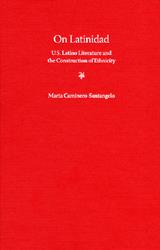 On Latinidad
U.S. Latino Literature and the Construction of Ethnicity

"From the early pages, in which Caminero-Santangelo asks us to explore stories of collective identity implicit in the social construction of Latino-ness, to the conclusion, which breaks through much of the confusion by calling on her readers to think about latinidad as commitment, Caminero-Santangelo gives us something weighty to chew on practically every page, and all of it in her smart, lucid, elegant prose."--Debra A. Castillo, Cornell University

"On Latinidad deals with complex issues in a very sophisticated, critical way. It is useful to scholars working outside the field as an introduction, not only to the background and contexts of Latino Literatures, but also to the current debates, trends, and directions in the field."--Delia M. Poey, Florida State University

This is the first book to address head-on the question of how Latino/a literature wrestles with the pan-ethnic and trans-racial implications of the "Latino" label.

Refusing to take latinidad (Latino-ness) for granted, Marta Caminero-Santangelo lays the groundwork for a sophisticated understanding of the various manifestations of "Latino" identity. She examines texts by prominent Chicano/a, Dominican American, Puerto Rican, and Cuban American writers--including Julia Alvarez, Cristina García, Achy Obejas, Piri Thomas, and Ana Castillo--and concludes that a pre-existing "group" does not exist. The author instead argues that much recent Latino/a literature presents a vision of tentative, forged solidarities in the service of particular and sometimes even local struggles. She shows that even magical realism can figure as a threat to collectivity, rather than as a signifier of it, because magical connections--to nature, between characters, and to Latin American origins--can undermine efforts at solidarity and empowerment.

In the author's close reading of both fictional and cultural narratives, she suggests the possibility that Latino identity may be even more elastic than the authors under question recognize.

Marta Caminero-Santangelo is associate professor of English at the University of Kansas.

"A terrific book that can be used as both an introduction to the growing field of Latino/a literary study and an object lesson in how to cross that terrain where cultural theory, political history, and narrative analysis form a crucial but tricky intersection."
--Tulsa Studies in Women's Literature

Documenting the Undocumented: Latino/a Narratives and Social Justice in the Era of Operation Gatekeeper