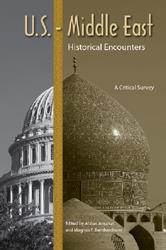 "This impressive collection of interdisciplinary essays not only demonstrates the range of modern U.S.-Middle Eastern encounters--be they political, economic, or cultural--but the nuance and complexity of these encounters also. In doing so, the book provides fresh perspectives on Middle East-American relations. It highlights the uneven evolution of American hegemony in the region, while not losing sight of creative exchange, resistance, and irony."--Sarah Gualtieri, University of Southern California

"Likely to lead to a new reappraisal of American cultural influence in the region."--Michael Provence, University of California, San Diego

"From early cultural and religious encounters to present-day popular culture and everything in between, these essays paint a sobering picture of misunderstanding and misperception on both sides--and how their unfortunate or even tragic consequences continue even now to shape U.S. relations with the Middle East."--Mary Ann Heiss, Kent State University

At a time when relations between the United States and the Middle East seem to be based on mutual misunderstandings, intolerance, violence, and distrust, this cutting-edge collection of essays reveals that the history of this relationship is richer and more complex than recent events suggest.

In the nineteenth and early twentieth centuries, relations between the Middle East and the United States were generally quite positive. After World War I, as U.S. policy toward the region took on aspects of European-style imperialism, the relationship began to sour.

Written by leading scholars from literary, historical, and political science backgrounds, these essays examine a range of encounters. They analyze early American missionary efforts in the Middle East, views of New York City in Arabic literature, and the development of Middle East studies as an academic field in the United States. Archaeological expeditions, twentieth-century diplomatic relations, and the current war on terror are also discussed.