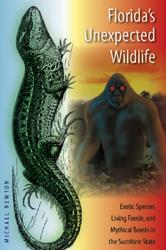 "Newton takes the general reader, the traveling tourist, and the curious cryptozoologist on a tour of the strange animals and weird cryptids to be found in one of the most popular vacation destinations in existence, Florida. Florida's Unexpected Wildlife is one of those unique guidebooks that need to be purchased by everyone!"--Loren Coleman, author of Cryptozoology A to Z

Throughout the world, sightings of animals unrecognized by modern science are reported on a daily basis. Since the 1950s, the study of these "hidden animals" has been known as cryptozoology and though many of the reports have been exposed as hoaxes, some have resisted explanation.

In Florida's Unexpected Wildlife award-winning author Michael Newton describes exotic species recognized by state wildlife authorities; "extinct" species whose passing is disputed or disproved; various aquatic "monsters" said to occupy Florida's rivers, lakes, and offshore waters; alien big cats; and the search for the elusive, enigmatic Skunk Ape--a local relative of Bigfoot. Newton's tales are riveting, and include a six-foot tall emu encountered by a jogger in a subdivision and a "sea serpent" carcass discovered at the mouth of the St. Johns River in the mid-nineteenth century by passengers aboard a schooner. The stories are illustrated with photographs and the incomparable paintings of artist William Rebsamen, hailed as the "John James Audubon of cryptozoology."

While "monster hunters" can use Florida's Unexpected Wildlife as a field guide, casual readers can simply enjoy the many fascinating tales and the wealth of evidence collected in this book. Grab your binoculars and enjoy the quest!

Michael Newton is a professional writer and author of nearly 200 books, including the Encyclopedia of Cryptozoology.

…truly a gift for that "hard-to-buy-for" friend.
--Tampa Bay Magazine

"Well-rounded and comprehensive." "Provides an excellent framework for the many case histories that needed to be documented." "Not only is this book a fascinating, highly-browsable read and great value for money, but is also likely, thanks to Newton's skills in researching a given subject thoroughly and accurately, to become (and remain) a standard work on the mysterious and controversial creatures of Florida."
--Fortean Times