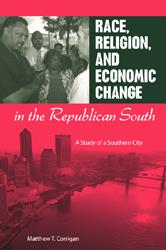 Race, Religion, and Economic Change in the Republican South
A Study of a Southern City

"Provides a striking example of a problem inherent to democracies: the most dramatic political successes--like the rise of the Republican Party in the South--often create situations in which effective governance becomes more difficult."--Stephen Baker, Jacksonville University (Florida)

Once known as a Democratic stronghold, the "Solid South" is now politically dominated by the Republican Party. With frank and provocative analysis, Matthew Corrigan explores how the interaction of race relations, economic isolation, and religion create a unique set of challenges and opportunities for the majority party in the American South.

Corrigan uses an intensive case study of Jacksonville, Florida, to examine the attitudes of southern voters more broadly. As an urban southern city that now votes solidly Republican, it reflects the political changes that have taken place across the region. Drawing on research that includes over 2,000 surveys and interviews, Corrigan considers whether or not Republicans, who now hold a majority of federal offices in the South, can provide a political system to address the region's problems.

Scholars, pundits, and members of the general public from both political parties will find this book accessible and timely.

Matthew T. Corrigan is chair of the Department of Political Science and Public Administration at the University of North Florida.

" Matthew T. Corrigan's study is a work of art, a picture painted in black and white over a region of the nation that is red. A major contribution to the literature on Southern urban politics."
--H-Net Reviews