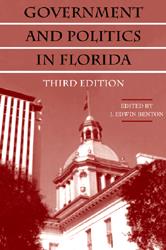 "A heady book discussing finance, taxes, economics, ethnicity and just about anything else you'd want to know about the state, including its gradual shift from a fiercely Democratic stronghold to a state that frequently elects Republican candidates."--Naples Daily News' review of the second edition

For more than fifteen years, Government and Politics in Florida has been the only book to offer authoritative information on the operations of government and nuances of politics in the Sunshine State. Published in two editions (1991 and 1998) under the editorship of Robert Huckshorn, the book has consistently featured contributions by Florida's most well-known and respected political scientists.

Now edited by Edwin Benton, the third edition retains all of the chapters from the previous edition--though all have been revised and many rewritten by new authors. There are also entirely new chapters on the critical policy areas of education, public welfare, and health care, and one on intergovernmental relations. A chapter in the second edition on public opinion and interest groups has been divided into two chapters, one focusing on political culture and political attitudes, the other focusing on interest groups. A final, concluding chapter ties together the volume and speculates about the future of government and politics in Florida.

From executive branch to legislature, from the court system to political parties, there is no other book that serves as a better introductory text for courses on Florida government.

J. Edwin Benton is professor in the department of government and international affairs at the University of South Florida.