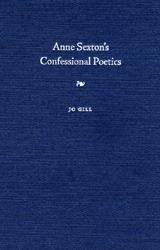 "Makes the case that Sexton was a highly original poet of the twentieth century but best understood in twenty-first-century terms. The result is a genuinely fresh appreciation of the artistic achievements of Anne Sexton."--Diane Middlebrook, professor emerita of English, Stanford University

Given the amount of scholarship on twentieth-century poetry, there has been remarkably little published about Anne Sexton, even though her work is considered to be as important as that of such contemporaries as Sylvia Plath and W. H. Auden. By offering new and provocative readings of her entire oeuvre, Jo Gill provides a long overdue critical appreciation of Anne Sexton and presents a radical rethinking of the confessional mode of poetry and a recuperation of Sexton's place in it.

Gill makes substantial use of Sexton's archive of unpublished diaries, drafts, correspondence, lectures, interviews, stage readings, and book annotations, as well as a little-known television documentary on Sexton. She also uses techniques that have not been previously applied to Sexton's poetry to increase our understanding of the poet's life and work.

Employing new--principally poststructuralist--literary theories and critical practices, Gill offers new readings of Sexton's complex and ambitious poems. She discusses the diversity and richness of Sexton's writing across her career, shows the relevance of the often-ignored later poems, and places Sexton's work in its specific historical, political, and ideological contexts.

Jo Gill is a lecturer in twentieth-century literature at the University of Exeter.