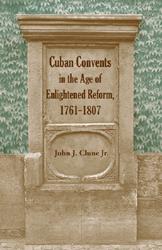 "An intriguing examination of the interplay and conflict between enlightened reform and Creole culture at the elite level of colonial habanerosociety."--Allan J. Kuethe, Texas Tech University

"A work of significant importance for students and scholars in Cuban and Latin American history."--Sherry Johnson, Florida International University

Catholicism underwent momentous change as it transitioned to the modern era and the relatively new colonial environments of North America and the Caribbean. Critical to this evolution was the role of women in religion.

John J. Clune Jr. examines the impact of the eighteenth-century European Enlightenment on the lives of nuns in colonial Cuba and New Orleans, both crucial centers of Catholicism where women had significant influence.

John J. Clune Jr. is chair and associate professor of history at the University of West Florida.

"A delightful micro-study of a much-overlooked aspect of the wider historic bourbon reform processes in America." "As a social history of the Havana elite, it works beautifully; as a microcosm of the wider Bourbon experience, and the tensions which it generated, it is revealing, turning the broad canvas into a more human picture. The detail is always fascinating, but the wider picture also comes through convincingly. It is archival history as it should be written."
--Bulletin of Hispanic Studies

"Cuban Convents is packed with intriguing details about the implications of the reforms and the reasons for their provocation in the four female religious orders operating in Havana, makes a useful contribution to the under-examined religious and political history of eighteenth-century Cuba and the virtually uncharted territory of convent life in the Spanish colonial Caribbean."
--The Journal of Latin American Studies - Cambridge University Press