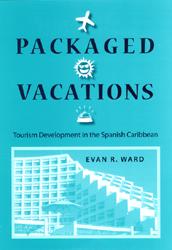 "Ward fills a gap in the literature on hotel and tourism destination development by careful historical analysis of the cases provided by Dorado Beach, Puerto Rico; Cancun, Mexico; Varadero, Cuba; and Punta Cana, Dominican Republic, from the early 1950s to 2006."--Dennis J. Gayle, University of the West Indies

"Provides a fascinating history that begins with the details of the selection and design of individual resorts (e.g., Laurance Rockefeller's Caneel Bay in St. John, USVI) and proceeds logically in scale to the global context of tourism (e.g., the possible direction of Cuba in the post-Fidel Castro world)."--Paul F. Wilkinson, York University, Ontario

Evan Ward's compelling study provides analytical insight into the evolution of today's principal tourism destinations in the Spanish Caribbean. Packaged Vacations examines the political and economic forces that led to the creation of resorts in Puerto Rico, Mexico, Cuba, and the Dominican Republic, as well as the impact tourism has had on local environments, economies, and cultures.

By comparing and contrasting a number of case studies, Ward reveals how historical, political, architectural, planning, and environmental factors led to the unique identities of resorts throughout the region. He also demonstrates that the growth of tourism in the region into a major economic force is driven as much by local and European interests as by those of American corporations.

Evan R. Ward is assistant professor of history at the University of North Alabama .

"A valuable addition to the history of the region's tourism. For scholars and students interested in tourism, economic development, foreign investment, and sustainable development in Latin America, it has much to offer."
--H-Net Reviews

"An excellent and much-needed study on resort development and its consequences in the Spanish Caribbean."
--The Americas

"A well-written and compelling piece of work that offers much to historians of tourism, business researchers, social scientists and others who seek to unravel the complex set of forces that have guided tourism policy-making and economic development in the Caribbean."
--Bulletin of Latin American Research

"Makes a great contribution to the burgeoning literature on tourism studies, for it clearly demonstrates that Caribbean nations will continue to foster tourism development as they participate in global processes of economic integration now that agriculture and manufacturing seem to have lost their roles as the main economic activities in the region."
--Centro Journal

"…an insightful text, providing rich accounts of both sides of tourism development and allowing the reader a rare glimpse into the innards of tourism investment decisions and tourism policy." "…fills a gap in the literature of Caribbean tourism and offers many lessons as we attempt to transition our industry to one that is more inclusive, sustainable and competitive"
--Sherman Roberts, Social and Economic Studies