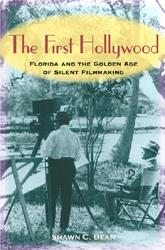 The First Hollywood
Florida and the Golden Age of Silent Filmmaking

There wasn't always just one Tinseltown

"A compelling story of the rise and fall of Jacksonville, Florida, as a major motion picture studio rival to Hollywood. Along the way you'll meet visionaries, film pioneers, and famous names, as well as grifters and con men."--Richard Alan Nelson, author of Lights! Camera! Florida!

"Although nonfiction, at times it reads like a fast-paced novel, telling the story of how it was Jacksonville--not Hollywood--that served as this country's first film capital. A fascinating read."--Patrick D. Smith, Pulitzer and Nobel Prize-nominated author, Florida Artists Hall of Fame inductee

Jacksonville, Florida, was the king of the infant film industry. Devastated by fire in 1901, rebuilt in a wide variety of architectural styles, sharing the same geographic and meteorological DNA as southern California, the city was an ideal location for northern film production companies looking to relocate.

In 1908, New York-based Kalem Studios sent its first crew to Jacksonville. By 1914, fifteen major companies--including Fox and Metro Pictures--had set up shop there. Oliver Hardy, D. W. Griffith, Mary Pickford, and the Barrymores all made movies in the Florida sunshine. In total, nearly 300 films, including the first Technicolor picture ever made, were completed in Jacksonville by 1928.

But the city couldn't escape its past. Even as upstart Hollywood boosters sought to discredit Jacksonville, the latter imploded from a combination of political upheaval, simmering racial tensions, disease, and World War I. Shawn Bean uses first-person accounts, filmmaker biographies, newspaper reports, and city and museum archives to bring to light a little-known aspect of film history. Filled with intrigue, backroom shenanigans, and missed opportunities, The First Hollywood is just the kind of drama we've come to expect from the big screen.

Shawn C. Bean has twice been named Writer of the Year by the Florida Magazine Association. He is a former music and theater reviewer for the Miami New Times and current contributor to Florida Travel & Life and Miami.

" Worthwhile if only for its fascinating section on Richard Norman, a white filmmaker who made silent movies in Florida with African-American casts, films that we're told were "free of racial stereotypes typical of the era.""
--Orlando Magazine

" The writing is brisk and will appeal to general audiences, yet the book is respectably complete with notes, a bibliography, and an index."
--Book News Inc.

"An important source for understanding this history."
--Journal of Southern History