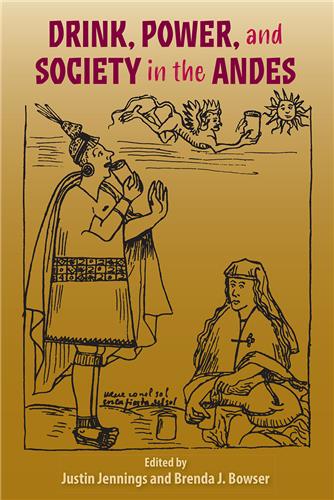 Drink, Power, and Society in the Andes


“Illustrate[s] the complex roles maize beer and other varieties of chicha have played in maintaining social stability and precipitating social change in the Andes. . . . Greatly adds to our knowledge by using new tools of analysis to place drinking patterns within their own cultural and historical contexts.”—Social History of Alcohol and Drugs

“Rooted in archaeological, historical, and ethnographic data presented by scholars with first-hand knowledge of the implications, nuances, and limits of the evidence. . . . The articles neatly intersect to form a coherent and collective examination of the drink in past and present Andean societies.”—Reviews in Anthropology

“A comprehensive assessment of the current state of research and the range of views on continuity vs. change in this long-standing Andean tradition.”—Journal of Anthropological Research

"A timely addition to a corpus of works that relates to feasting. Whether you are an archaeologist, ethnohistorian, or ethnographer, Jennings and Bowser's compelling volume speaks to a rich and detailed understanding of the many changing roles and traditions that drinking plays in the Andes."--George Gumerman IV, Northern Arizona University

"Chicha is not just a South American beverage, but, as the authors of this superb volume demonstrate, a set of cultural creations that flows among the lives of Andean peoples, past and present."--Jerry D. Moore, California State University, Dominguez Hills

For more than two thousand years, drinking has played a critical role in Andean societies. This collection provides a unique look at the history, ethnography, and archaeology of one of the most important traditional indigenous commodities in Andean South America--fermented plant beverages collectively known as chicha.

The authors investigate how these forms of alcohol have played a huge role in maintaining gender roles, kinship bonds, ethnic identities, exchange relationships, and status hierarchies. They also consider how shifts in alcohol production, exchange, and consumption have precipitated social change.

Unique among foodways studies for its extensive temporal coverage, Drink, Power, and Society in the Andes also brings together scholars from diverse theoretical, methodological, and regional perspectives.

Justin Jennings is senior curator of Latin American archaeology at the Royal Ontario Museum, as well as associate professor of anthropology at the University of Toronto. He is the author or editor of many books, including Globalizations and the Ancient World. Brenda J. Bowser, professor of anthropology at California State University, Fullerton, is the coeditor of The Archaeology of Meaningful Places.

"Jennings and Bowser suggest the gathered ethnographic, ethnohistoric, and archaeological perspectives will challenge assumptions that chicha traditions have remained largely unaltered from past to present. Each contributor seems to have evidence that ever aspect of chicha has been altered as it is passed down." "For anyone interested in the subject, either within the Andes or elsewhere, this volume provides a comprehensive assessment of the current state of research and the range of views on continuity vs. change in this long-standing Andean tradition."
--Journal of Anthropological Research, vol. 66