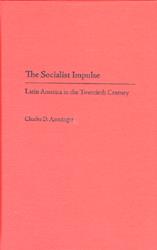 The Socialist Impulse:
Latin America in the Twentieth Century

"An exhaustive and detailed overview of all things socialist in twentieth-century Latin America. Ameringer's mastery of the broad literature, as a senior member of the profession and building on decades of careful reading, is clear as he delves into the relevant works in political history, intellectual history, and political science."--W. John Green, Senior Research Fellow, Council on Hemispheric Affairs

"Ameringer asks what may be the fundamental question about the twentieth century--the century that was to have been the time of the common man: What happened to the aspirations for betterment that began to be raised in the late nineteenth century and first burst the dam with the Mexican Revolution."--Thomas C. Wright, University of Nevada-Las Vegas

During the last century, Latin American countries have had a tendency to adopt a socialist-style government. This region has viewed socialism as a way to overcome poverty, oppression, ignorance, racism, underdevelopment, and foreign domination. Charles Ameringer discusses the vision and reality of the century-long effort in Latin America to embrace socialism as a way to gain economic development and justice.

Ameringer's sweeping analysis covers a wide range of countries and decades. He concludes that whatever the variety of socialism attempted in Latin America, none has stood the test of time. By analyzing the socialist movements and governments that evolved, he is able to highlight the events and factors that led to their eventual collapse.