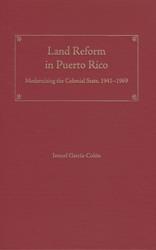 "Very well written and engaging. Successfully weaves histories, data, and stories together in examining land redistribution. There is a judicious and enlightening use of secondary and primary sources, which makes this a virtually unique study."--James L. Dietz, University of California, Fullerton

"Offers a refreshing and much-needed fine-grained ethnographic and historic examination of the years of the Partido Popular reforms."--Vilma Santiago-Irizarry, Cornell University

The 1930s and the reign of the New Dealers in Washington brought incredible changes to Puerto Rican society. A new land redistribution plan, formalized in the 1941 Land Law, aimed at enfranchising, empowering, and urbanizing the landless workers by resettling them in parcels that they would own. With these new urban communities built, community cooperation and services such as potable water, electricity, education, and sanitation followed. The result was that twenty years after the passage of the Land Law Puerto Rico was cited internationally as a paragon of modern development.

In this intimate and enlightening work, Ismael García-Colón uses ethnography, political and economic theory, and primary and secondary historical sources to paint a compelling and human portrait of the land redistribution program. He assesses not only the technical and political aspects of the program but also the ways in which the Puerto Rican people actively resisted, accommodated, and influenced the development it brought about. Finally, García-Colón takes a clear look at the successes and failures of this historic program, which attempted in vain to reconcile the conflicting interests of planned development and free-market economics.

Ismael García-Colón is assistant professor of anthropology at CUNY College of Staten Island.

"Should be of interest to anyone who wishes to learn more about Latin American land reform projects of the mid-twentieth century. The interweaving of personal testimonies, historical documentation, and well-presented analysis makes this book well worth reading."
--H-Net Reviews

"Fills a viod in the literature of Puerto Rico and the Caribbean."
--American Historical Review

"García-Colón combines historical documents with ethnographic accounts from the memeories of the original paceleros to provide a rich analysis of the hegemonic process of state formation in Puerto Rico during the middle of the twentieth century. Until the publication of this book, little ethnographic description existed of the relationship between the formation of the colonial state and modern urban subjectivities in Puerto Rico. García-Colón has made a great contribution to current studies of land reform in Puerto Rico and elsewhere in Latin America, where similar processes of land reform and the construction of modern subjectivities have occurred since the mid-twentieth century."
--New West Indian Guide, Vol 86. No. 1-2