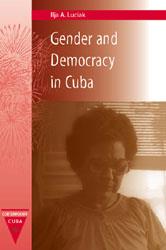 Gender and Democracy in Cuba

"[Luciak] has taken two taboo subjects in Cuban political thought, gender and democracy, and fused them together in an analytically elegant way. . . . Many people shy away from studying democracy in Cuba because it seems such an oxymoron. . . . His astute analysis makes this book highly original and significant."--Julie Shayne, Emory University

"A fascinating book on an important issue, employing unique sources of information . . . a must-read for anyone interested in gender equality, electoral politics, and democratization in Cuba."--Lorraine Bayard de Volo, University of Kansas

In this in-depth view of Cuban gender politics and democracy, Luciak considers the role that women played in the Cuban revolution. The women who joined Castro's revolution were considered indispensable, and a select group of women held leadership roles. Che Guevara in particular recognized the important contribution women could make to the revolutionary struggle. Most women engaged in open civil dissent and staged demonstrations, while some, such as Celia Sanchez, supported clandestine armed operations at great personal risk.

Luciak maintains that Cuba's revolutionary government made great progress in advancing women's social and economic rights and proved successful in guaranteeing women's formal political participation. Ironically this success had an unintended consequence: It inhibited public debate on how to transform prevailing gender relations and preempted the emergence of an autonomous women's movement that could effectively advocate for change. As a result, women hold very limited decision-making power in the current regime.

Sanchez was a lifelong confidante to Fidel Castro, who considered women's emancipation to be a "revolution in the revolution." But Cuban feminists see Sánchez as a symbol of women's invisibility, noting that her image adorning the Cuban 20-peso note is part of the watermark, which can be viewed only when held against the light. Drawing on interviews with high-ranking Cuban officials, Luciak argues that democracy cannot be successfully consolidated without the full participation of women in the political process--and the support of men--both at the party and societal levels.

Ilja A. Luciak is chair of the political science department at Virginia Tech.

"Contributes to the growing literature examining Cuban democracy on its own terms, rather than those of liberal democracy. Particularly useful for courses introducing students to the Cuban political process and to the relationship between gender and democracy in general."
--The Americas

"An exemplary book that all scholars of Latin American women and politics should read."
--Politics and Gender

"Offers significant new material based on interviews and conversations with a host of Cubans."
--New West Indian Guide

The Sandinista Legacy: Lessons from a Political Economy in Transition