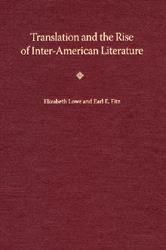 Translation and the Rise of Inter-American Literature

"A welcome addition to the Latin Americanist's toolkit."--Adria Frizzi, University of Texas at Austin

The past few years have seen an explosion of interest among U.S. readers for Latin American literature. Yet rarely do they experience such work in the original Spanish or Portuguese. Elizabeth Lowe and Earl Fitz argue that the role of the translator is an essential--and an often ignored--part of the reception process among English-language readers.

Both accomplished translators in their own right, Lowe and Fitz explain how stylistic and linguistic choices made by the translator can have a profound effect on how literary works are perceived by readers unfamiliar with a foreign language. They also point out ways in which the act of translation is critical to the discipline of comparative literature.

Touching on issues of language, culture, and national identity, Translation and the Rise of Inter-American Literature is one of the first book-length works in this newly emerging field. Combining theories and histories of literature, translation, reception, and cultural studies, it offers a broad comparative perspective rarely found in traditional scholarship.

Elizabeth Lowe is director of the Center for Translation Studies at the University of Illinois. Earl E. Fitz is professor of Portuguese, Spanish, and comparative literature at Vanderbilt University.

" The 15 -page conclusions should be required reading for everyone in the field of comparative literature, for it speaks to translation as interpretation and as creative transfer, and to the fact that good translators ought to be recognized for what they are: good writers. Comparatists whose work embraces Latin American literature will need this book. Essential."
--Choice

Rómulo Betancourt: His Historical Personality and the Genesis of Modern Democracy in Venezuela