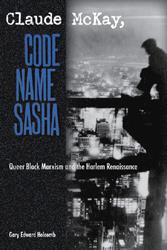 In recent years, access into McKay's work has been transformed by new methods of interpreting the politics of literary texts, the growing significance of transnationality in literary and cultural analysis, and the impact of queer theory. Holcomb analyzes three of the most important works in McKay's career--the Jazz Age bestseller Home to Harlem, the négritude manifesto Banjo, and the unpublished Romance in Marseille. Holcomb uncovers ways in which Home to Harlem assembles a homefront queer black anarchism, and treats Banjo as a novel that portrays Marxist internationalist sexual dissidence. Among the most notable contributions to black modernist study, Holcomb's scholarship is the first to assess the consequence of McKay's landmark Romance in Marseille, a text that is, despite its absence from broad public access for nearly 80 years, conceivably the most significant early black diaspora text. Finally, he examines McKay's extensive FBI file and his late-1930s autobiography, A Long Way from Home, in which McKay disguises his past as a means of eluding his harassers. The memoir is essential to understanding McKay's first three novels. Relying on queer theory and related language-oriented approaches, moreover, this study emphasizes that the key to McKay's queer black Marxism lies as much in confronting his textual absence as it does in rereading the author historically.