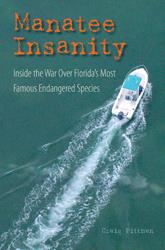 Manatee Insanity
Inside the War over Florida's Most Famous Endangered Species

The State You're In: Florida Men, Florida Women, and Other Wildlife
The Scent of Scandal: Greed, Betrayal, and the World's Most Beautiful Orchid
Paving Paradise: Florida's Vanishing Wetlands and the Failure of No Net Loss