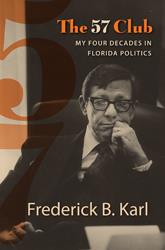 The 57 Club
My Four Decades in Florida Politics

"Karl's descriptions of various aspects of the legislative process are superb. . . . His candid discussions of what it feels like to be on the losing side of a legislative vote or an election (in his case for governor) and how to move on afterward should be read and taken to heart by those contemplating political careers."--from the foreword by David Colburn and Susan McManus

"Lays bare the turbulent era of Florida politics in the '50s and '60s by telling the unvarnished story of how a few courageous men fought against segregationists and self-serving interests and laid the foundation for government in the sunshine. Through anecdotes--both humorous and serious--first-person accounts, and delightful descriptions of the people and places throughout the state, Mr. Karl's book opens a wondrous window on this crucial time in Florida's political history."--Michael Foerster, former Hillsborough County director of communications

Frederick Karl's story portrays a group of Florida legislators and their political friends and enemies in a time of intense turmoil that marked the late 1950s and '60s in Florida.

The 57 Club was the self-assigned name of the thirty-nine legislators first elected to the Florida House of Representatives in 1956. Karl's fascinating autobiography not only recalls those years, when Florida was in the midst of a transformation away from its rural, racially segregated, Deep South roots, but also offers intimate details into a half century of public service.

By sharing his own experiences and reactions, describing what he witnessed or heard along the way, and telling stories about friends and colleagues, Karl gives readers a front row seat to some of the most captivating and turbulent moments in twentieth-century Florida politics. His insights into how the legislature functions--from the politics of committee assignments to the usefulness of lobbyists, from the savvy use of rules on the floor to debating skills, from polite ways of punishing unethical colleagues to the use of humor to calm angry exchanges, and much more--all make for an absorbing tale.

Frederick B. Karl was born in 1924 in Daytona Beach. At the age of 18 he was commissioned a second lieutenant and saw action as a tank platoon leader in Europe. Wounded during the Battle of the Bulge, he was awarded the Silver Star, the Bronze Star, and the Purple Heart. He later served eight years as a state representative and four years as a state senator.

Karl became Florida's first public counsel in 1974 and was the last elected Justice of the Florida Supreme Court two years later. After resigning in 1978, he returned to government service--first as county attorney, then as county administrator of Hillsborough County. He was asked to take over the helm of Tampa General Hospital in 1994. After leaving this post, he was appointed city attorney by newly elected Tampa mayor, Pam Iorio. In 2004, at the age of 80, he officially retired for the fourth and final time.

An inaugural volume in the series Florida Government and Politics, edited by David Colburn and Susan MacManus

"A significant and welcome addition to the history of Florida government and politics. Fred Karl provides an insider's comprehension and insight into key policies which are invaluable to understanding the development of the state. He reminds the reader of a time past when many in public office took seriously the duties and power entrusted to them by the voters, when the general welfare of the citizens predominated over political ideology. Those seeking to learn more about Florida politics in the 1950s and '60s will find this book an excellent introduction to those times."
--Florida Historical Quarterly, vol. 89 n2

"Insightful and entertaining accounts of Florida politics in the second half of the twentieth century. As today's progressives confront a political environment in which honesty and moderation are at risk, they would do well to study Karl."
--Tampa Bay History

perspective is unique and is enjoyable to read
--Lakeland Bar Association

Outlining all of the 20th century's most captivating political moments, the book is an absorbing tale.
--Florida Monthly