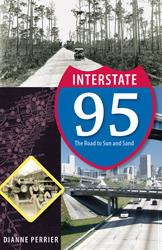 Interstate 95:
The Road to Sun and Sand

"From horseback to stagecoach, and into the front seat of the family station wagon, Dianne Perrier takes readers on a wonderful journey along the trails, plank roads, and macadamized routes of yesteryear--laying the historical foundation for the I-95 super slab of present day."--Michael Karl Witzel, author of Barbecue Road Trip: Recipes, Restaurants, & Pitmasters from America's Great Barbecue Regions

Stretching from Maine's Canadian border almost all the way to the Florida Keys, Interstate 95 traverses fifteen states, plus the District of Columbia, and links the cities of Boston, New York, Philadelphia, Baltimore, Richmond, Fayetteville, Savannah, Jacksonville, and Miami--to name but a few. At more than 1,900 miles, it’s one of the longest and most heavily travelled (11 million vehicles per year) roads in the country.

For both snowbirds and spring-breakers, I-95 is an escape route to sand and sunshine. Travelers may complain about heavy traffic, poor road conditions, and delays, but as Dianne Perrier points out in this fascinating cultural history of the I-95 corridor, such has always been the case.

The pace of travel--and life--is faster now, so it's hard to imagine that Longfellow was inspired to write his famous poem about Paul Revere by an evening spent at a tavern along the road that would eventually be served by I-95. Perrier reminds us of the profound and mundane events that took place along the corridor, from battles to vacations, and recounts the technological travel advances from foot to horse to railroad to automobile. In doing so, she reminds us of the joy in travelling, and that each exit consists of more than a name on a green highway sign.

Dianne Perrier is a freelance writer and editor who divides her time between Ontario, Canada, and Fernandina Beach, Florida.

"A fascinating read of this road, and providing a grand dose of history."
--The Midwest Book Review, January 2011

"Quirky and engaging cultural history of one of the longest roads in the United States. Turns what is so often merely a long drive with some nice scenery or, even worse, a collection of mile markers before the next restroom into a series of places where history actually happened."
--The Journal of Southern History Volume LXXVII, No 4