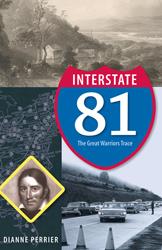 "Perrier is a consummate tour guide, making the readers know they are directed by an authority. Above all she engages the reader in the landscape’s many dimensions--historical, geographic, and environmental. One is well advised to travel I-81 with Perrier’s book in hand."--Keith Schulle, author of Motoring: The Highway Experience in America

From its northernmost point just south of the U.S.-Canadian border, in Wellesley Island, New York, through the Appalachians to its southernmost point in Dandridge, Tennessee, Interstate 81 links the Northeast with the non-Atlantic South. One of the major routes of the Dwight D. Eisenhower National System of Interstate and Defense Highways, the I-81 corridor was a much-traveled route, known as the "Great Warriors Trace," for centuries even before the invention of the automobile.

Part of I-81 drifts through the magnificent Shenandoah Valley in Virginia. Robert E. Lee returned to this area after the war and spent countless hours in the saddle roaming the hillsides, finding solace as he followed the woods and streams. Hiawatha lived and hunted along its northern reaches. Thomas Jefferson regularly rode from Monticello to homes he maintained at Natural Bridge and Poplar Camp. Andrew Jackson visited one small town along the way so often that the townsfolk renamed their community in his honor. George Washington surveyed it. Daniel Boone explored it, and thousands of pioneers of Scottish, Irish, and German descent settled it.

Today, the Great Warriors Trace has become a concrete ribbon of grey. A journey that took days now can be completed in about fourteen hours. Dianne Perrier's fascinating cultural history of the famous route reveals how grasslands and forests that once nourished buffalo now feed the demand for unimpeded travel. The result is a glimpse into both the heart and heartland of America.
Dianne Perrier is a freelance writer and editor who divides her time between Ontario, Canada, and Fernandina Beach, Florida.

"History, and American legends, spill from these 224 paperback pages. Both Jefferson and Robert E. Lee made homes along the Warriors Trace. From a Pennsylvania childhood, Daniel Boone explored and hunted it. Davy Crockett passed through en route to the Alamo and immortality. A very worthy tale."
--Hemmings Motor News

Onramps and Overpasses: A Cultural History of Interstate Travel
Interstate 95: The Road to Sun and Sand