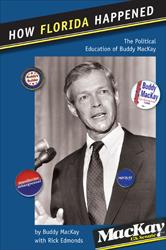 How Florida Happened
The Political Education of Buddy MacKay

"In this exceptionally well-told memoir, distinguished by clarity, poignancy, and humor, Buddy MacKay illuminates much that was known and not known about three decades of the history to which he contributed hugely as a Florida legislator, member of Congress, and lieutenant governor to the late Lawton Chiles."--Martin A. Dyckman, author of Floridian of His Century: The Courage of Governor LeRoy Collins

When Florida governor Lawton Chiles died unexpectedly on December 12, 1998, less than one month before Jeb Bush was to assume the office, it was left to Chiles's lieutenant governor, Buddy MacKay, to step in for twenty-three days and run the state. "I take no great pleasure in this," MacKay stated at his initial news conference, with good reason. Roughly one month prior, he had lost a brutal gubernatorial campaign as the Democratic nominee to Bush, meaning he now had to officiate over the investiture of a political opponent.

This is Kenneth "Buddy" MacKay's memoir of three decades of public life in Florida. It recaptures, in riveting detail, a time which saw Florida grow from a semi-rural to a mega-state, where political dominance shifted from the left to the right.

How Florida Happened, MacKay's first book, details his experiences in and influences upon Florida and national politics. As an officeholder in the Florida Legislature, the United States Congress, and at the highest levels of the executive branch of state government, he was a much sought-after source, frequently quoted by members of the press because of his ability to explain issues and enlighten the public in short, easily-understandable terms. His particularly keen eye and ear for the ironies and absurdities in government and politics as well as his brutal honesty come through in this welcome and wonderful memoir.

MacKay received the Democratic nomination for the United States Senate in 1988, only to lose to his Republication opponent by less than one percentage point. He was hardly finished with politics, however, as he convinced his political ally and friend Lawton Chiles to run for governor in 1990. For eight years he served as lieutenant governor with Chiles, only to personally learn in 1998, after his unsuccessful run for Florida governor, that the era of the Yellow Dog Democrat in Florida was officially over.

"Insightful and entertaining accounts of Florida politics in the second half of the twentieth century. As today's progressives confront a political environment in which honesty and moderation are at risk, they would do well to study MacKay."
--Tampa Bay History

For those interested in Florida's history it's a good read.
--Jacksonville.com