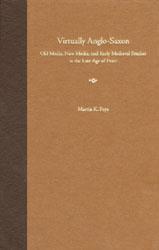 "It's not often that a scholar writes a book that puts her or his literary period on the map of literary studies . . . Particularly valuable because it tells us an immense amount about key texts and materials of Anglo-Saxon culture but because it also fills in a history entirely missing from recent work in New Media."--Richard Burt, University of Florida

Foys argues that early medieval culture did not favor the representational practices privileged by the modern age and that five hundred years of print culture have in effect shut off modern readers from interpretations of text and image that would have been transparent to a medieval audience. Examining print and post-print ways of reading medieval literature and art, he derives alternative models of understanding from the realm of digital media, considering pre-print expression through a range of post-print ideas and producing new and vital understandings of visionary Old English poetry, Anglo-Saxon maps of the world, 11th-century Benedictine devotional writings, medieval mathematical systems, stone sculpture of Viking settlers, and the famous Bayeux Tapestry.

Building chapter upon chapter into a sustained discussion of New Media theory and medieval interpretation, Foys provides a field-defining investigation of how digital technology and expression can refine and revitalize early medieval studies.

" This intelligent and thoughtful book will have a significant impact on Anglo-Saxon studies, and it has much to say to the wider world of literary studies also. A timely and thought-provoking contribution."
--College Literature

"A timely discussion of not only how some of these new ways of seeing allow us to view Anglo-Saxon texts and artifacts in a new way, but also how seeing them in a new light opens them up in entirely unexpected and enriching ways."
--Journal of English and Germanic Philology