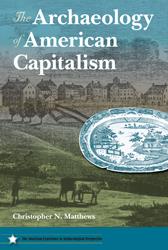 The Archaeology of American Capitalism

"Matthews has offered a bold new interpretation of the archaeology of capitalism. This book will take historical archaeology in exciting new directions of inquiry."--Charles E. Orser Jr., author of The Archaeology of Race and Racialization in Historic America

"Does a very good job making sense of an exceptionally complex scholarship on capitalism that is routinely invoked in historical archaeology. As an introduction to the basic theoretical points in Marxian perspectives on capitalism and the archaeological scholarship that either intentionally or unwittingly borrows from such concepts, this book is a sound primer for undergraduate and graduate students alike."--Paul R. Mullins, author of Race and Affluence

Christopher Matthews offers a fresh look at the historic material culture and social meaning of capitalism in this wide-ranging and compelling study. Drawing on archaeological evidence from the colonial period to the modern era and covering sites from New England to California, The Archaeology of American Capitalism is the first comparative treatment in historical archaeology to comprehensively illustrate the development and evolution of capitalism in the United States.

Accessible to even the beginning student and organized chronologically, this volume focuses on the material construction of individuals as commodities, the orientation of social life to the market, and grassroots resistance to capitalist culture. Perhaps most intriguing, Matthews identifies the discipline of archaeology as an artifact of capitalism and offers a thoughtful investigation into the ways in which the transformative effects of capitalism determine not only much of the archaeological record, but the pursuit of archaeology itself.

"A work in historical archaeology that explores such topics as European-Indian relations, early colonial culture change, urbanization, and mass consumption."
--The Chronicle Review

"Drawing on a wide range of examples from New York City urban life to California mining camps, this compact study examines the material culture of capitalism in America and illustrates its development from the colonial to the modern eras. It is the first comparative treatment in historical archaeology to do so. Matthews treats archaeology as an artifact of capitalism by linking the study of material culture to its creation within a capitalistic society. The Archaeology of American Capitalism will challenge the reader to view American archaeology from a new perspective."
--American Archaeology, vol. 15 no.1

"A scholarly and fascinating study, enhanced with useful indexes, bibliography, and much more, making a core addition to any historical or economic history collections in community and college libraries."
--The Midwest Book Review

"Well argued and well written, the book is a must read for all serious scholars of historical archaeology, and it offers valuable insights into the diversity of group actions and reactions to capitalism in North America."
--CHOICE

"Asks us to seriously consider the abstractions of labour, individual subjectivity, and community created within capitalist relations. This is a valuable endeavor."
--Cambridge Archaeological Journal

"The diversity of the case studies as well as the originality and provocative quality found in the latter part of this book render it a fundamental contribution for anyone interested in building a theoretical background for archaeological practice."
--Labour/ Le Travail

"Makes a very strong and compelling case for the ways capitalist social relations shifted the focus of life from the family or the community to the individual."
--The Journal of American History

"joins a growing number of historians, heterodox economists, and activists in denaturalizing capitalism by excavating the rules and practices governing market exchange over the last several centuries."
--Winterthur Portfolio

A Struggle for Heritage: Archaeology and Civil Rights in a Long Island Community
The Archaeology of Race in the Northeast