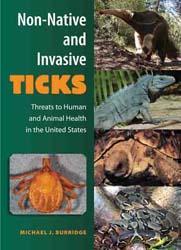 At least 100 non-native tick species have been introduced into the continental United States during the past century. These introductions of invasive ticks have increased markedly in recent years as the international trade in live animals, and in particular reptiles, has burgeoned.

Many of these ticks are vectors of serious diseases affecting both humans and animals, and several also cause direct damage to their hosts. Despite the risks posed to public and animal health, current measures to prevent introduction of invasive ticks are both inadequate and poorly enforced.

Michael Burridge’s comprehensive study of invasive ticks provides a detailed account of all non-native ticks introduced into the continental United States, documenting their methods of introduction, hosts, geographic distribution, life cycle and habitat, and disease associations. The first work of its kind, the book also provides a concise review of the risks that these ticks pose to the health of humans and animals and of methods for their control and eradication. Burridge also outlines specific actions that should be taken to minimize the harm invasive ticks could do to human and animal health, to the environment, and to the economy if they were to become established in the United States.

Based upon years of investigation and fieldwork, this is an indispensable volume for scientists, physicians, veterinarians, and governmental officials involved in wildlife management, disease control, and live animal import.

Michael J. Burridge, emeritus professor in the University of Florida’s Department of Infectious Diseases and Pathology, has directed tick-related research projects in Africa, Asia, and the Caribbean, as well as in the United States, and has published extensively on ticks and the diseases that they transmit.