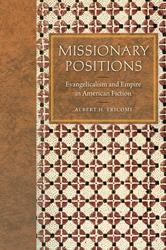 The central premise of Missionary Positions is that missionary evangelicalism has been an integral feature of American imperial ventures since the founding of the Republic. Albert Tricomi demonstrates that from the early nineteenth century to the present, American fiction writers have often sought to represent--and critique--America’s missionary identity in their work. In the process he defines the missionary novel as a distinct sub-genre of fictional narrative, explains how it came into being, and identifies its primary characteristics.

From Melville’s Typee and Omoo to Kingsolver’s Poisonwood Bible, from Michener’s Hawaii to LaHaye’s Left Behind series, Tricomi traces the various manifestations of the missionary novel over time. His close readings of individual works also treat selected novels of Sedgwick, Cooper, Hobart, McKay, and Lewis, as well as several examples of Twain’s short fiction.

Weaving together political, theological, and literary analyses, this original, thought-provoking investigation examines a broad range of works, featuring both those that celebrate and those that criticize American missionaries at home and abroad. Tricomi illuminates fascinating relationships between Christian evangelicalism and American destiny, including cultural and religious imperialism, and concludes with a disturbing judgment on the limitations of contemporary versions of the genre.