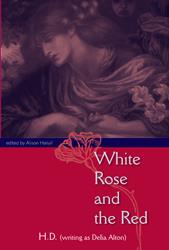 White Rose and the Red

"H.D. scholars have been writing about White Rose and the Red for decades, but the manuscript has remained cloistered in the archives. Now at last, in Alison Halsall's meticulously researched critical edition, an important work of modernist fiction sees the light of day."--Helen Sword, University of Auckland

"It is time that this evocative and fascinating novel became available for further study (and enjoyment) to readers/scholars of H.D. as well as feminist literary scholars and scholars of modernism and of Victorian literary studies. It will become essential reading."--Cassandra Laity, Drew University

Never before published, White Rose and the Red is the fictional biography of Elizabeth Siddall, wife of English poet and painter Dante Gabriel Rossetti. This extraordinary novel explores the charged interpersonal relationships between and among Siddall, Rossetti, and other key members of the pre-Raphaelite movement, including William Morris and John Ruskin.

During H.D.'s lifetime, publishers shied away from the novel's radically unconventional hybrid form that combines elements of historical nonfiction, fiction, and biography. As part of the dense and allusive prose trilogy written during and after World War II (along with The Sword Went Out to Sea and The Mystery), White Rose and the Red exemplifies the mythic theme that H.D. saw as unifying all her writing. It also examines how Siddall--a controversial muse and model--came to become the iconic figure of an artistic movement.

H.D. (born Hilda Doolittle, 1886-1961) was an American writer who lived in London before, during, and after World War II. Many of her novels were written under the pseudonym Delia Alton.

"A fascinating resource for specialists in women's studies and Victorian studies."
--Choice