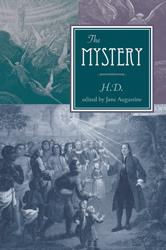 
"Augustine's edition of The Mystery is a model of editorial excellence and an immense contribution to H.D. scholarship, crucial to an understanding of the poet's creative processes and central themes. Every reader of modernist literature will want to have this edition at hand."--Donna Hollenberg, University of Connecticut

In The Mystery, finished in 1951 but never before published, H.D. tells a tale of love, intrigue, and religious redemption. Drawn from her notes to her memoir, The Gift, the novel imaginatively re-creates the history of her mother's Moravian Church, Unitas Fratrum, and its leader, Count Zinzendorf, from which she believed she had inherited a psychic "gift."
This "gift" enables her to reenvision her inheritance. The Moravian cousins, Elizabeth de Watteville and Henry Dohna, Zinzendorf's grandchildren, travel to Prague in winter 1788, on the eve of the French Revolution. There they meet Count Louis Saint-Germain, a magician and counterrevolutionary plotter, whose life changes as he joins their search to find Zinzendorf's lost Plan for "world unity without war."
A hybrid novel combining modernist stream-of-consciousness and medieval legend, The Mystery completes H.D.'s cycle of romances following The Sword Went Out to Sea and White Rose and the Red. It reveals her feminist theology and writes finis to her obsession with spiritualism. Jane Augustine's introduction and extensive notes provide a significantly enlarged view of H.D.'s religious thinking.

H.D., well-known as an Imagist poet, has reemerged as a major modernist writer through publication of her previously unavailable prose. Jane Augustine, an independent scholar, has written four books of poetry and numerous essays on women writers, gender, and religion. She also edited The Gift by H.D.: The Complete Text.

"Will be of interest to scholars of H.D.'s life and work, late modernism, autobiography, esotericism or literature and religion. This eclectic list itself demonstrates the value of H.D.'s work for interdisciplinary study."
--Literature and Theology Advance Access