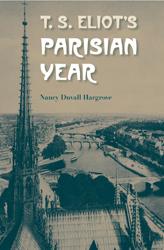 "Research reveals the rich and varied cultural and intellectual experiences available to an eager young Thomas Stearns Eliot during the year he spent in Paris: Wagnerian opera, the Ballets Russes, music of Stravinsky and Beethoven, Bergson's philosophy, exhibits of Cubist paintings, the intellectual ferment in the pages of La Nouvelle Revue Française. This is a remarkable work of intellectual biography and cultural history."--Benjamin G. Lockerd Jr., Grand Valley State University

"Hargrove has demonstrated beyond refutation the formative significance of the year Eliot spent in Paris, and she has done so with a wealth of documentation that will enable other scholars to build on her achievements."--Cyrena N. Pondrom, University of Wisconsin

"Serves as a Baedeker of Paris before WWI for students of the humanities and as a corrective for biographers' assumptions. Highly recommended."
--Choice