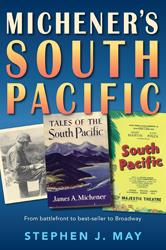 "May is one of the foremost authorities on writer James Michener. In this book he takes you inside the creation of Michener’s Tales of the South Pacific and the musical South Pacific. May fascinates us with his detailed accounts of key players like Richard Rodgers, Oscar Hammerstein, Josh Logan, and many others."--Ken Womble, director of James Michener: An Epic Life

"Stephen J. May confirms his reputation as James Michener’s most pertinent, sensitive, and accessible biographer with Michener’s South Pacific. In the wake of the acclaimed 2008 Broadway revival of South Pacific, it may seem absurd that, once upon a time--six decades ago--adapting such a serious, unflinching work as Michener’s for the musical stage was a risky challenge."--Laurence Maslon, author of The South Pacific Companion

When the Japanese attacked Pearl Harbor, James A. Michener was an obscure textbook editor working in New York. Within three years, he was a naval officer stationed in the South Pacific. By the end of the decade, he was an accomplished author, well on the way to worldwide fame.

An award-winning biographer of Michener, May was a featured interviewee on the fiftieth-anniversary DVD release of the film version of the musical. During taping, he realized there was much he didn’t know about how Michener’s experiences in the South Pacific shaped the man and led to his early work.

May delves deeply into this formative and turbulent period in Michener’s life and career, using letters, journal entries, and naval records to examine how a reserved, middle-aged lieutenant known as "Prof" to his fellow officers became one of the most successful writers of the twentieth century.

Stephen J. May is the author of Michener: A Writer’s Journey, which served as the basis for the PBS documentary James Michener: An Epic Life. He has also written a two-volume biography of Zane Grey and served as technical advisor for the most recent Broadway revival of South Pacific.