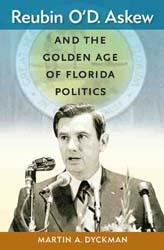 Reubin O'D. Askew and the Golden Age of Florida Politics

Inside the reinvention of Florida politics

"If I were asked to recommend just one book about my state that would remind us all of the power of real policy and real leadership, I would recommend this one. This is a fascinating history, with lessons for all of us, written by one of the best journalists this state has ever known."--David Lawrence Jr., publisher, Miami Herald (retired)

Reubin Askew was swept into the governor’s office in 1970 as part of a remarkable wave of progressive politics and legislative reform in Florida. A man of uncompromising principle and independence, he was elected primarily on a platform of tax reform.

In the years that followed, Askew led a group of politicians from both parties who sought—and achieved—judicial reform, redistricting, busing and desegregation, the end of the Cross Florida Barge Canal, the Sunshine Amendment, and much more.

This period was truly a golden age of Florida politics, and Martin Dyckman’s narrative is well written, fast paced, and reads like a novel. Dyckman also reveals how the return of special interests, the rise of partisan politics, unlimited campaign spending, term limits, gerrymandering, and more have eroded the achievements of the Golden Age in subsequent decades.

Martin A. Dyckman, retired associate editor of the St. Petersburg Times, is the author of Floridian of His Century: The Courage of Governor LeRoy Collins and A Most Disorderly Court: Scandal and Reform in the Florida Judiciary. His series on Florida prison conditions circa 1971 won the Distinguished Service Award of the Florida Society of Newspaper Editors, the Silver Gavel of the American Bar Association, and the Associated Press Managing Editors Association Public Service Award. In 1984, the Florida Bar Foundation recognized his writing on judicial reform with its Medal of Honor Award.

"Several questions haunt this must-read biography. If, as Dyckman contends, Askew helped usher in a "golden age of Florida politics," why did Floridians allow successors to dismantle so much that he stood for? What is the proper role of the state in citizens' lives? Or to paraphrase Ronald Reagan, 'Are Floridians better off than we were 40 years ago?'"--Gary R. Mormino for Ta
--Tampa Bay Times

"This book is not written to amuse. It is written for historians, political scientists and elected officials who take their work seriously. In fact, it would be a useful textbook for aspiring politicians and political journalists. In a border sense, Dyckman is a describing a remarkably admirable period in Florida's turbulent political history and lamenting the passing of that era when genuine public service was taken so seriously by so many. It is eminently instructive. Floridians observing today's political antics in Tallahassee could learn a thing or two about genuinely noble, selfless, public-spirtied aspects of public service by reading Dyckman's book."
--Reporter's Notebook

"An interesting, well-written window into a time that Florida's leaders were racing to transform it in into the modern state that its mushrooming population required."
--The Florida Bar Journal

"One will not find a more vivid or more compelling portrayal of Florida politics and government in the last third of the twentieth century."
--Journal of Southern History

"In chronicling Askew's career, Dyckman demonstrates the skills and sensibilities of a dedicated journalist…Only someone who was there, as Dyckman was, tracking events on a daily basis, could provide such a nuanced account."
--Florida Historical Quarterly

"Dyckman uses his understanding of the inner workings of Florida government, combined with a journalist’s eye for fascinating detail, to create a full portrait of Askew and those who played significant roles in leading Florida in the 1970s."
--Tampa Bay History

A Most Disorderly Court: Scandal and Reform in the Florida Judiciary
Floridian of His Century: The Courage of Governor LeRoy Collins