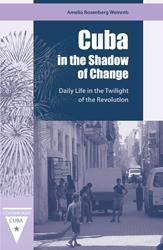 "This book is a masterpiece. Accurate, lyrical, and empathetic in its illumination of the lives of ordinary Cubans, as they survive and thrive in the bizarre economic and political environment of Cuba during its 'Special Period.'"--Archibald Ritter, Carleton University

Amelia Weinreb takes readers deep inside the everyday life of middle-class Cubans--arguably the majority of citizens on the island. Un-theorized and under-described, it is a group that is portrayed honestly, accurately, and empathetically.

The political and economic systems of Cuba in the post-Soviet period pose ongoing challenges to ordinary Cubans as they struggle in the waning years of the Castro regime. Weinreb demonstrates that the major reason they have been ignored in the scholarly literature is because remaining obscure is one of their strategies for coping with these challenges.

Weinreb has made repeated visits to the island, frequently living in local communities along with her family. Thus her ethnography of this "shadow public" is based upon traditional participant-observer methodology. Her experiences--from the clothesline, the back bedroom, the kitchen table, and the living room sofa--allow her an unprecedented opportunity to bring to outside readers the reality of daily life in Cuba, and she includes an epilogue that addresses citizen and consumer changes that have taken place since Raúl Castro became president in February 2008.


No other book reveals so much about the anxieties and clandestine plans that have shaped Cubans' lives during the final years of the Fidel Castro era.

Amelia Rosenberg Weinreb is a lecturer in the department of anthropology at the University of Texas at Austin.

"A fascinating, attractively written narrative about living in Cuba as it changes erratically under the Castro brothers in the first decade of the 21st century. . . . Highly recommended."
--Choice

"Rosenberg Weinreb's innovative study on Cuba's silent majority is highly recommended to all historians, enthnographers, and social scientists who are interested in contemporary Cuba and in gaining new insights in order to explain widely known phenomena and changes within Cuban society since the 1990s."
--H-Net Reviews