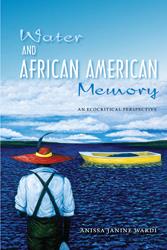 "This cutting-edge text not only increases our understanding of African American literature and film; it also enlarges the accessibility and the possibilities of the field of ecocriticism."--Yvonne Atkinson, Mt. San Jacinto College and president of the Toni Morrison Society


While there is no lack of scholarship on the trans-Atlantic voyage and the Middle Passage as tropes in African diasporic writing, to date there has not been a comprehensive analysis of bodies of water in African American literature and culture.

In Water and African American Memory, Anissa Wardi offers the first sustained treatise on watercourses in the African American expressive tradition. Her holistic approach especially highlights the ways that water acts not only as a metaphorical site of trauma, memory, and healing but also as a material site.

Using the trans-Atlantic voyage as a starting point and ending with a discussion of Hurricane Katrina, this pioneering ecocritical study delves deeply into the environmental dimension of African American writing. Beyond proposing a new theoretical map for conceptualizing the African Diaspora, Wardi offers a series of engaging and original close readings of major literary, filmic, and blues texts, including the works of Toni Morrison, Ntozake Shange, Julie Dash, Henry Dumas, and Kasi Lemmons.

Anissa Janine Wardi, author of Death and the Arc of Mourning in African American Literature, is associate professor of English and director of cultural studies and African American studies at Chatham University in Pittsburgh, Pennsylvania.

[A] worthy eco-critical perspective on how some important African American writers, including Tony Morison and E Gaines, present water in their work...The book demonstrates that human abuse of the environment correlates with abuse in general--abuse of women, animals, African Americans, and indeed victims of every sort.
--Choice Review

A rich, thought-provoking, and thoroughgoing elucidation of the centrality of this lifetaking and livegiving substance in African American history, consciousness, and expression.
--Tulsa Studies in Women’s Literature

[H]er use of water as a cultural analytic offers a compelling and culturally relevant way to dive deeply into the depths of twentieth-centuy African American cultural texts.
--Callaloo