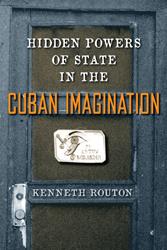 Hidden Powers of State in the Cuban Imagination

"A valuable contribution to scholarship in Cuban studies and the study of religion in the Americas. Routon goes beyond other works in analyzing the Cuban capacity for combining apparently incompatible beliefs such as socialism and various Afro-Cuban practices. He also provides a number of important insights into the processes by which magical and ritual idioms of power feed the political imagery and exercise of power in Cuba, and vice versa."--Christine Ayorinde, author of Afro-Cuban Religiosity, Revolution, and National Identity

"A fascinating, timely, and deftly balanced account of the power of magic and the state in revolutionary Cuba. This compelling and evocative book transports readers to the secret and mysterious alleys of religious and political workings, the ritual production of selective historical memory, and the current statecraft of religious appropriations."--Raquel Romberg, author of Healing Dramas: Divination and Magic in Modern Puerto Rico

"Hidden Powers of the State in the Cuban Imagination is a remarkable achievement. Rather than delivering "yet another" ethnography of an objectified entity called Afro-Cuban religion, Routon opens up fresh and illuminating perspectives on the historical complexity and contemporary volatility of the semiotics of a world in which the experientially occult nature of power has become coextensive with the experience of the powers of the occult."--Stephan Palmie, University of Chicago

Despite its hard-nosed emphasis on the demystifying realism of Marxist-Leninist ideology, the political imagery of the Cuban revolution--and the state that followed--conjures up its own magical seductions and fantasies of power. In this fascinating account, Kenneth Routon shows how magic practices and political culture are entangled in Cuba in unusual and intimate ways.

Routon describes not only how the monumentality of the state arouses magical sensibilities and popular images of its hidden powers, but he also explores the ways in which revolutionary officialdom has, in recent years, tacitly embraced and harnessed vernacular fantasies of power to the national agenda. In his brilliant analysis, popular culture and the state are deeply entangled within a promiscuous field of power, taking turns siphoning the magic of the other in order to embellish their own fantasies of authority, control, and transformation.

This study brings anthropology and history together by examining the relationship between ritual and state power in revolutionary Cuba, paying particular attention to the roles of memory and history in the construction and contestation of shared political imaginaries.

Kenneth Routon is visiting assistant professor of cultural anthropology at the University of New Orleans.

"An accessible, well-written case study of the relationship between popular culture and the state."
--CHOICE

"Boldly presents material that may be considered taboo in the secular, material, discourse of western academia: spells, hexes, talismans, magic, spirit possession, communication with the dead, with the gods, etc. He discusses the social and political effects of these phenomena without becoming mired in the attendant phenomenological or ontological concerns"
--Bulletin of Spanish Studies, Vol. LXXXIX

"Routon manages to grapple with this complex interplay of political and magical power, and his book will be a valuable intervention in Cuban studies."
--Bulletin of Spanish Studies, Vol. LXXXIX

"Demonstrating an impressive command of the literature on Cuba, Routon weaves together ethnographic vignettes drawn from his fieldwork in the town of Guanabacoa, just outside of Havana, and locally known as the 'barrio of brujos' (neighborhood of witches)."
--Identities: Global Studies in Culture and Power, Vol. 19, No. 1.

"demonstrate[s] how anxiety over the seen and unseen, and thus dominance through visuality, have been key to nation-state-formation in Latin America"
--Journal of Latin American and Caribbean Anthropology