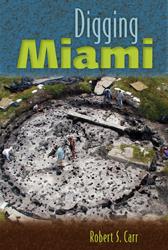 "A wonderful, moving narrative of the archaeology of greater Miami."--Paul George, editor of Tequesta

"Amazing. In spite of the intense urban development of Southeast Florida, valuable archaeological contexts are still present and continually being discovered."--Randolph Widmer, University of Houston

The pace of change of Miami since its incorporation in 1896 is staggering. The seaside land that once was home to several thousand Tequesta is now congested with roads and millions of people while skyscrapers and artificial lights dominate the landscape. Ironically, Miami's development both continually erases monuments and traces of indigenous people and historic pioneers yet also leads to the discovery of archaeological treasures that have lain undiscovered for centuries. In Digging Miami, Robert Carr traces the rich 11,000-year human heritage of the Miami area from the time of its first inhabitants through the arrival of European settlers and up to the early twentieth century. Carr was Dade County's first archaeologist, later historic preservation director, and held the position at a time when redevelopment efforts unearthed dozens of impressive archaeological sites, including the Cutler Site, discovered in 1985, and the controversial Miami Circle, found in 1998. Digging Miami presents a unique anatomy of this fascinating city, dispelling the myth that its history is merely a century old.
This comprehensive synthesis of South Florida's archaeological record will astonish readers with the depth of information available throughout an area barely above sea level. Likewise, many will be surprised to learn that modern builders, before beginning construction, must first look for signs of ancient peoples' lives, and this search has led to the discovery of over one hundred sites within the county in recent years. In the end, we are left with the realization that Miami is more than the dream of entrepreneurs to create a tourist mecca built on top of dredged rock and sand; it is a fascinating, vibrant spot that has drawn humans to its shores for unimaginable years.

"Gives an excellent view of the daily work and career of salvage archeologists and other non-academic archeological workers in the US."
--Book News

"Tells the exciting story of the many battles to understand and preserve the city’s rich archaeological heritage. Carr makes a strong case for historic preservation in a booming urban area. He also makes a strong case for the wisdom of working closely with developers and governmental officials to preserve the past as part of the modern legacy."
--American Archaeology

“A unique vision of the past easily overlooked on a stroll through the Magic City.”
--Florida Book Review

“Full of interesting facts.”
--Notes from a Fish (blog)

“For this engaging volume Robert S. Carr has literally looked beneath the urban sprawl and the McMansions and malls to synthesize what we know about Miami’s past.”
--The Journal of Southern History

“It is personal but rigorous; it is data-rich but engagingly written; it is about the past peoples of Miami-Dade County but also about their discovery in the present.”
--Antiquity

“Bob Carr tells the stories of ancient south-eastern Florida with the unique voice of Miami-Dade’s first county archeologist…It is a blend of historical research, larger than life characters, hard to believe events, and little-known artifacts and sites woven together in the best tradition of archeological storytelling.”
--Florida Historical Quarterly