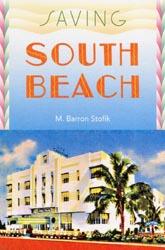 "Stofik reports with wit and insight on the personalities that gave rise to the new South Beach, a place that has surpassed what the city's founders, dreamers, and schemers strove for: America's playground."--Gary Monroe, author of The Highwaymen: Florida's African-American Landscape Painters (UPF) and Romer's Miami

"An important--and highly readable--window into the historic preservation movement in Miami Beach. . . . Stofik makes a solid contribution to the history of Florida and its growing impact on the nation's sense of place." --Gregory Bush, professor of history, University of Miami, and coauthor of Miami: An American Crossroad

Only 30 years ago the southern end of Miami Beach was a dingy warren of deteriorating hotels, retiree apartments, and high crime rates. Saving South Beach is the compelling story of the fight to preserve a decaying neighborhood, only to see it transform into one of the world's most glamorous hotspots--"SoBe."

In Saving South Beach, historic preservation clashes with development as each side vies for control of South Beach. A spectrum of characters are present, from Barbara Baer Capitman, the ailing middle-aged widow who became an evangelist for the Miami Beach Art Deco district, to Abe Resnick, the millionaire Holocaust survivor determined to stop her. From pioneers to volunteers, from Jewish retirees to Cuban exiles, from residents and business owners to developers and city leaders, each adds another piece to the puzzle, another view of the intense conflict that ensued.

Although a number of the area's iconic buildings were demolished, the Miami Design Preservation League succeeded in entering almost half of the neighborhood into the National Register of Historic Places, kicking off a revitalization effort that spread throughout South Beach.

Preservationist M. Barron Stofik lived in Miami during this turmoil-ridden period and, through hundreds of interviews and extensive investigation, weaves together dramatic themes of civic heroism, preservation, and cultural change in the passionate human story behind the pastel facades and neon lights.

M. Barron Stofik is a writer and preservationist living in Connecticut.

"The story is exceptionally interesting and has--as she is at pains to point out--implications that go far beyond the boundaries of the square mile that is the Miami Beach historic district."
--Washington Post

"The account of how a desperate struggle over two square miles of prime oceanfront real estate in South Beach created one of America's most popular destinations for art, tourism, fashion, and nightlife draws on hundreds of interviews to provide stories of civic heroism, preservation, and cultural change."
--Forecast

"Part of the estimable Florida History and Culture Series." "The story is exceptionally interesting and has implications that go far beyond the boundaries of the square mile that is the Miami Beach historic district."
--Herald (Broward County Edition)

"The story of South Beach and its striking transitions is certainly worth recording, and Stofik deserves credit for making a valiant effort to do so. . . Saving South Beach could readily be used by a future histoiran as the basis for further chronicles."
--Fore Word

"Explores how elements of South Beach's past successfully survived to become part of the eye-popping art deco, pastel playground of the present."
--Cape Cod Times

"Dramatic...chronicles the saga to save the famed art deco district, from the era of the midnight teardown to its current status as a hipster heaven."
--Denver Rocky Mountain News

"Dramatic...chronicles the saga to save the famed art deco district, from the era of the midnight teardown to its current status as a hipster heaven."
--Rocky Mountain News & Denver Post

Saving South Beach reads like a novel. Full of history, adventure, intrigue, excitement, and drama, it gives us a glimpse into the lives of real folks. The saga of saving this architectural treasure trove is intertwined with very human stories of the people involved.
--Collectors Journal

…timely, real-world example of the issues surrounding preservation efforts and the many competing interests that must be balanced. …rich in detail about the history of the area, its diverse culture and population, and the important historical and decorative elements of each building. …puts a human face on the pivotal issues of private property rights and land use and who gets to decide these issues, a point made all the more urgent with the recent U.S. Supreme Court decision expanding the government's power to seize property under the law of eminent domain.
--History News

…a useful account for students of public history and Florida history and anyone with interest in preservation.
--The Public Historian

" There is a great deal to be learned from this thorough case study."
--Journal of the Historical Association