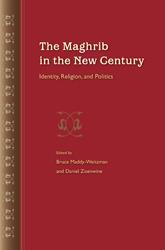 The Maghrib in the New Century
Identity, Religion, and Politics

"A most welcome contribution on the state of the Maghrib at the start of the new century. It is the great merit of this volume that all these issues are analyzed in considerable detail, giving both scholars and policymakers the opportunity to be better informed of the challenges emerging from such an important but often underexamined region of the world."--International Journal of Middle East Studies

"A fine collection of original pieces by an international group of authors that fills a hole in current literature. All the other works on the entire Maghrib are out of date because of the current importance of Islamic political movements."--I. William Zartman, Johns Hopkins University

The Maghrib's core states--Morocco, Algeria, and Tunisia--are confronted by many of the same dire political, social, and economic circumstances as the Arab and other Muslim countries farther east. However, they are often overlooked during debates over the future of the Middle East. This volume focuses on Islamic movements, emphasizing the importance of the Berber dimension of contemporary North African society and politics, and highlighting a crucial transnational perspective that underscores the Maghrib’s ties to Europe. All of this is set against a backdrop of larger questions of history, memory, and national identity.