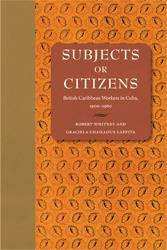 "Whitney and Chailloux Laffita merit high praise for their trenchant research and analysis of the changing political, diplomatic, and colonial finance dynamics within and beyond contexts of British and Spanish Antillean divides. They have turned a twentieth-century narrative that was understood only partially into a well-structured whole. An outstanding historical exercise in the crossing of thresholds."--Joseph C. Dorsey, author of Slave Traffic in the Age of Abolition

"Strives to debunk one of the long-standing myths of Cuban history--that Cuban nationalism is exceptional within the Caribbean. The authors posit that there was no contradiction between being Cuban and being Caribbean; West Indian immigrants outwardly became Cuban while still retaining cultural links and emotional attachments to their respective homelands."--David Stark, Grand Valley State University


During the first half of the twentieth century, Cuba was the center of circum-Caribbean diasporas due to the arrival of over 200,000 immigrants, mainly from Jamaica and Haiti. As many of them went to work on sugar plantations, this migration of British Caribbean peoples was a critical part of the economic and historical development of the island.

Using never-before-consulted oral histories and correspondence, Robert Whitney and Graciela Chailloux Laffita examine this British Caribbean diaspora and chronicle how the immigrants came to Cuba, the living and working conditions they experienced there, and how they both contributed to and remained separate from Cuban culture, forging a unique identity that was not just proudly Cuban but also proudly Caribbean.

Robert Whitney, professor of Caribbean and Atlantic world history at the University of New Brunswick, is the author of State and Revolution in Cuba. Graciela Chailloux Laffita is senior researcher at the Casa de Altos Estudios Don Fernando Ortiz, University of Havana.

In addition to advancing our understanding of the British Caribbean experience in Cuba, this book addresses a number if themes that are central to Cuban and Caribbean history, including plantation agriculture, state formation, national and racial identity, and colonial ideology and policy . . . A useful addition to the literature on the history of migration in the Caribbean.
--New West Indian Guide